Way back in the days of SNES and Megadrives one of the key genres on any system was the scrolling beat-em-up, classics of the genre include Double Dragon, Final Fight and Streets of Rage. While these games worked perfectly in 2-D they seemed to suffer in the early transition to 3-D and as a result a once popular genre seemed to be left in the past.
God Hand from Capcom's Clover Studios follows the tried and tested scrolling beat-em-up format and tries to regenerate the genre in the final days of the PS2.
After seeing the early hype and trailers for God Hand I was really excited as over the last year Capcom have constantly churned out top quality games and I was hoping that God Hand was more of the same. 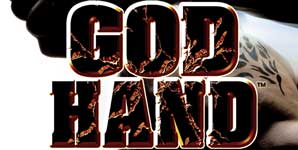 Story
Generally the story takes a back seat in this genre however God Hand makes a decent attempt at a humorous, sometimes crazy story. From the off you are thrust straight into the game as Gene or `God Hand' and his sexy partner Olivia. As you progress through the stages the story unfolds and more is revealed about Gene's past and motives. While not the most complex and engaging story ever, it doesn't really need to be, the fact that the character are all bursting with personality and the game purposely over the top more than make up for this.

Graphics
The game's view is akin to Resident Evil 4, a slightly raised over the shoulder view of your character. The main character models and bosses all look sharp and designs are inventive however it is a bit disappointing that the main enemy fodder in the game consists of a smaller range of palette switched models.
One thing that did let the game down in terms of graphics was the blandness of the backgrounds which are a bit drab and repetitive - also many of the building that you can enter are a bit to sparse in terms of furnishings and decorations.
Overall graphics are good however just lack that final touch of style to add the `wow factor'

Sound
The voice actors do a great job of injecting a load of personality to the characters. While some of the characters churn out some very strange, off-the-wall lines it is all in keeping with the humour of a game that never takes itself seriously. The Music is also very good, with a vast range of music that crosses many styles including techno, rock and jazz. This again adds to the overall wackiness of the game.

Gameplay
The main selling point of the game is that you can customise Gene's movelist from over 100 different punches, kicks, chops, and grapples which you can either buy, win from enemies, or sometimes just find lying around the various stages. Using these 100+ moves, you're free to set up Gene's main combo. You can also map other attacks such as sweeps, guard breaker and charge hits to the various action buttons.
This level of customisation gives the player a lot of depth to model Gene to their own individual fighting style - you can make Gene into a slower but hard hitting machine or instead use lots of juggles and floats to take out enemies while suspended mid-air. In addition this level of customisation also provides reason to play for longer as the incentive to unlock better moves exists. Moves are drawn from many different martial arts and you can pretty much invent your own style or stick to your preferred martial art.
As well as your basic combos you can also call upon the God Reel Roulette moves. These are super strong moves which you can use from time to time. By hitting R1 action slows to a crawl while you select a move from a list to dish out some hefty pain - you have to act quickly though as a timer counts down so choosing the correct move for the situation can be pressurised. It is worth bearing in mind that not all roulette moves are beneficial and can backfire resulting in large kitchen implements falling on you or Gene deciding to grovel in front of oncoming attackers. This is a really novel idea that adds a lot of humour and an element of strategy to the gameplay.
In addition to the God Reels you can also `unleash the God Hand' by hitting R2 when your tension meter is full. This mode grants you super speed, damage and invulnerability for a limited period. The key is deciding when to best utilise the power of the God Hand, often best used for bosses or the various demons that crop up through the game.
Depending on who you are fighting and the situation, you can also hit finishing moves when instructed by on screen prompts - these are often flashy, funny and devastating - and well worth connecting with if you can react in time.
One interesting point with the gameplay is the Level Up/Down system which essentially changes the difficulty level based on your performance during the game. This means that if you are creaming all of the enemies with stylish combos the game takes this into account and enemy difficulty steps up a notch but also rewards you accordingly.
There are loads of levels and sub missions/challenges to navigate and also in between stages a fun casino with games such as poker where you can (hopefully) maximise your earnings to spend on more moves. While fairly simple this is a nice distraction from the hordes of enemies hell bent on killing you. Once you have worked through Normal there is also a Hard mode for the pros.
One thing that does need to be said about the game is that it is by no means an easy game and it can be punishing. If you are faint of heart or like your games unchallenging then this isn't for you!!
While difficult, I never felt that the game was being `cheap' and while frustrating at points you always feel that it is because that you are not good enough rather than the game cheating you. For me this is key as it encourages you to improve as you play - however I can see why this may not appeal to everyone.
As with all beat-em-ups some people will find this game repetitive, however that really is the nature of the beast - generally you either love or hate this type of game.

Controls
You control Gene using RE4 `tank controls' however while this usually conjures up images of awkward, slow moving gameplay it actually works out quite well. Gene responds well to the commands and although it took me a while to get fully used to the control scheme in the end it all feels very intuitive.
Movement is all undertaken via the left analogue stick however all of your evasive moves such as bobbing, weaving sidesteps etc are controlled with the right analogue stick. Therefore in the middle of a fight a quick nudge of the right stick will see you avoid enemy attacks if timed correctly. This does take getting used to however once mastered (and it is key that you master dodging) makes for great looking fights. Thankfully also included is a 180 degree turn mapped to L1 which allows you to either leg it or respond to rear attacks swiftly.
Square and triangle and Cross control your main attacks with the various specials mapped to the right shoulder buttons.
Overall the game responds well and the control scheme really suited the game and added to the enjoyment.

Conclusion
I thought this game was fantastic, a great update on an almost forgotten genre. The game is fun, responsive and a great challenge to boot.
One word of caution though - The game does have that `cult' feel to it and the level of craziness and difficulty may scare a few away - therefore a rental before purchase may be worthwhile.
For those of you who think you are up to it. step up and unleash the God Hand!
Overall God Hand gets.