So, The Godfather. Another legendary feature film butchered as a game in order to milk an already successful franchise? Another game hyped to be the next Grand Theft Auto only to fail unspectacularly? With the hype surrounding this outing together with the release date being put back from Autumn 2005, you would hope the clout of EA would offer a finished product that would explain what all the hype was about… 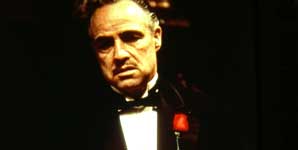 The game starts with the now mandatory "EA Game Face" customisation; only for The Godfather we have "Mobface". Customise your mobster and away we go…. The first cut scene shows your character as a young child watching on as his Father is "hit" by a rival mob. You then forward in time to the wedding scene from the film with your mother asking Don Corleone to look after you and to steer you in the "right" direction. As we know, a Don cannot refuse a favour on his daughters wedding day so everything falls right into place. You control a figure that doesn't feature in the film but as the game unfolds you understand that he was always on the periphery of the story and many of the scenes from the movie would not have unfolded without your characters intervention. EA have written this character in well. The Don sends for the foreboding Luca Brasi and we have our mobster mentor.

You hit the streets as an enforcer of the Corleone family and the first breaths of the game are spent shaking down local merchants for protection money. They won't usually go without having a foul chirp, but they can always choose to see what Mr Fist has to say about that so you usually get the protection money in the end. Your aim at this point is to increase your weekly earnings and more businesses you "own" throughout the city, the more this increases. Finding stores that are illegal fronts for gambling, prostitution, etc will maximise your earnings. As you progress through the game you will hone the tools of your trade. If you want to get "wet" the right analogue stick will deliver blows from your fists of fury, or better yet, grab and throw using the L and R triggers. However, the most ultimately satisfying way to cause death is to grab an opponent and push the analogue sticks together and choke them. The pad vibrates in time with the reducing breaths of the choke. Sickening; yet addictively brilliant.

Getting "wet" and extorting money is not the be all and end all. As you progress a number of differing weapons will be at your disposal to use in the missions that will arise. The gunplay will take a bit of getting used to and not just because you will initially be short in your upgradeable skills (fighting, shooting, persuasion, etc.) Upgrading your shooting skill is paramount as it steadies your aim which will result in a quicker kill. You can customise your aiming and aiming view as well from free aim to automatic and from first person to third. The missions are sometimes taken directly from the film such as driving the gunned down Don to hospital. It is difficult to describe the way the game plays without referring to Grand Theft Auto. You have free reign of the City of New York, you have a wanted level relating to how bad the cops want you, you can steal cars, you can randomly beat people for no reason and you pick your missions that may involve all or some of the above. It is fair to say the game borrows from Grand Theft.

The platform for your maiming is a modelled version of the five boroughs of 1940's New York and it looks well. The more missions you complete and the more people you extort will mean your respect increases and you will rise in rank within the Corleone family. Your aim? To become the King of New York.

The soundtrack to the movie, the character voices (notably Marlon Brando but more notably not including Al Pacino) and the cut scenes give the game the Godfather feel more than anything else but there is a sense of detachment as you are not directly involved in the action from the film all of the time. However, this also has its plus points as it is less of a "paint by numbers" game that just re-enacts the film scene by scene and it works with the original creation rather than putting itself on a pedestal to be shot down by trying to copy it.

Overall, the Godfather is a thoroughly enjoyable game in its own right. I believe EA made a cracking decision to interweave a new plot that runs alongside the movie rather than attacking the source material and failing as many others have in the past. Whilst comparisons can be drawn to the GTA series I would prefer to look at this game on its own merits and it remains respectful of The Godfather as the influential film that it was and still is. The release isn't perfect but since when is anything perfect, especially movie based games? I was worried before I played that very little thought would have been put into this as it would have made money just because of its title. This certainly isn't the case, and The Godfather has certainly increased his respect. Is this "An Offer You Can't Refuse?" It's certainly worth a dabble.