Having played Ghost Rider, I find it difficult not to sum it up in the first paragraph. Never having been one to ignore a gut instinct, rightly or wrongly, it seems I am going to write the review in reverse order. I read elsewhere that a chap felt that Ghost Rider was "mediocrity at its finest" and it is easier said than done to find a phrase that feels more comfortably correct. Ghost Rider is undeniably entertaining in small doses but becomes a bit repetitive in the long run and really it has all been done before - perhaps literally but I will touch on this later. This really is a shame because the main character is a flaming skull of a man roaming around the underworld and he really deserves a better medium as such a unique character, than something that is as derived as Ghost Rider undoubtedly is. 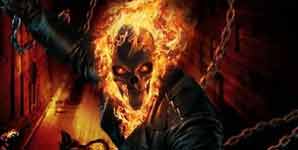 As the gamer, you take the lead role of Johnny Blaze. Johnny is a motorbike stuntman who strikes a deal with the devil (Mephisto) in order to save his terminally ill father from cancer. In a twist of fate that Johnny really should have expected from someone who, lets face it, is evil personified; Mephisto cures his father before killing him anyway and thus taking both of their souls. Transformed into the hellish & soulless Ghost Rider, Johnny roams around Hell to fight anyone and anything that tries to stop him escaping.

The gameplay has you splitting your time between walking around on foot wielding a flaming chain (no, you haven't heard of any other game where this is the main weapon, stop being obtuse) and riding around on the `Hellcycle'. On foot, you will find that many rooms contain the same array of demons to fight and that, annoyingly this is not only repetitive but random off screen (and therefore unseen) attacks continue to annoy. As you will unlock most of your moves pretty early doors in the game, no more surprises really unearth themselves so this gives you a good old fashioned button masher to look forward to. Granted you come across more weapons and special attacks than just a fiery chain (for the last time no, it's an original concept) but as these all get unlocked fairly quickly the game loses its mystery very early in affairs.

Variation from button mashing is provided in the form of cruising on your `Hellcycle'. My biggest gripe here is that the high speeds of the Hellcycle make the scenery blur thus making it almost impossible to engage in combat and tell where or when a jump or a slide are upcoming. The developers must have realised this as they have hastily included an indictor feature which pops up at the last minute with just enough time for you to perform the manoeuvre.

I was going to conclude here, but having already opened with a conclusion I will say this; We have an excellent game that features an abundance of action, various foes, enemies & bosses, combo fighting and chained weaponry. God of War. Whilst imitation is the sincerest form of flattery, creating a game that plays much like another, albeit with a new faÃ§ade and tweaked game-play, but that reveals itself far too early and becomes repetitive in the process does not a sequel or comparison make. I would say treat yourself to the film before considering the game, but I'd read the review first.