This has made me play for many ours, my girlfriend is starting to ask my name when I come up to bed as she has not seen me for a long time. 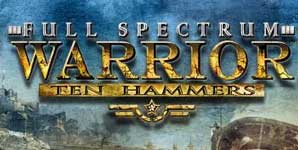 Sequel to the award winning squad-based/real-time tactical combat game, Full Spectrum Warrior: Ten Hammers improves on the ground-breaking and authentic military gaming experience with a number of innovative features threaded throughout every aspect of the game. As squad leader, players coordinate the actions of multiple infantry squads, leading them through a variety of hostile environments. An intuitive control scheme allows control of the squads in real-time as players outthink, out man oeuvre and outgun enemies through more than 12 levels of intense urban warfare. Players must utilize authentic combat tactics as they battle enemies with an explosive arsenal of weapons, high-tech military equipment and new controllable mechanized units. With an enhanced multiplayer mode, player can go online and battle friends through a variety of new head-to-head and team-based objective missions.

* Intense Squad Based Combat - Suppress and disband insurgent forces with the latest arsenal of weapons and equipment - all based on real-world military weaponry including the ability to control mechanized units, such as Bradley Tanks and Armored Humvee's

* Command Responsibility - The lives of the squad members lie in the players every movement and decision. An in-game replay video system, allows players to evaluate their squad's combat effectiveness and learn from mistakes

* Friend or Foe Online Game Play - Take the action online for a variety of multiplayer modes. Play through the game in Co-Op mode, go head-to-head with other players or team up for objective based missions

The game draws you in to kill everything in its wake, with grenades flying and the option to go back to the van and mend you men.

The only thing I did not like with this game is the way you control the teams. I wanted to walk them around myself not to order them into an area.