The original FIFA Street, whilst original and enjoyable, contained many bugs from hovering ball physics to poor computer AI. These quirks have been tightened up in the sequel to make for a more agreeable experience all round. FIFA Street makes an enjoyable alternative to the straight football simulations of Pro Evolution and EA's alternative FIFA offering. As before the concept of FIFA Street gives you the opportunity to win by being altogether more skillful and stylish than your opposition. Nutmegs, handstand passes, scissor kicks and putting your opposition of their arse are the order of the day. Depending on the game mode, you can win by scoring more trick points than your opponent, completing more nutmegs, scoring more 'gamebreakers' (fill your trick meter to enter gamebreaker mode) or perhaps daftest as all – scoring more goals than you let in. 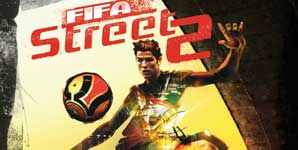 The 'gamebreaker' is an EA institution and has been refined for FIFA Street. Instead of loading your trick meter and then unleashing a thunderbolt of a shot from anywhere, you have to travel to the centre spot to trigger said gamebreaker. This, coupled with the relatively short nature of the time allowed to score the gamebreaker and the fact that should your opposition score in this time you would lose the opportunity, makes the experience all the more challenging. Depending on many of your opposition you can beat in gamebreaker mode will determine how powerful your ultimate goal is. Beat a couple of men and score and you will not only add to your own tally you will detract from your opponents as well. Put them all on their backside and score and the game is over by knock out – you are the daddy! This adds a strategic element to the action as it is now have the balls and skill to come back from a potential drubbing or even knock your opponent out, if you have the balls and the skill, during a gamebreaker when you are 15-0 down.

Performing the tricks to humiliate your opponent has a universal feel that should appeal to beginners as well as those that have at it for a while. Pressing triangle will perform a random trick that makes the game easier for the novice, whilst the right analogue stick is the 'trick stick' and used in combination with R1 – ball juggling, and other combinations will perform the trick of your choice. You can unlock more tricks as you move through the single player game which provides a multi-layered challenge to more experienced players with many tricks to perform. Indecision on which trick to perform will result in you being maimed by your opponents however, as do not expect any fouls as referees are non-existent. This another satisfying aspect of the action though, as whilst it is extremely satisfying to skillfully beat your opponent, its just as satisfying to send them flying with filthy two-footed lunge.

The single player "Rule the Streets" mode has been developed into a more in-depth challenge than the original FIFA Street. There are a number of challenges either on the "street" or in international matches. Along the way you will meet a myriad of current day stars but also latter day greats such as Beckenbauer. Each "star" has their own signature trick for you to master. Zidane's is obviously his 360 degree pirouette and Beckham's is made up and called 'Becks'.

The soundtrack to your FIFA Street has also been massively improved with the core MC now Zane Lowe playing an eclectic mix of indie, hip-hop and garage, and not the irritating Dizzee Rascal.

FIFA Street should not be compared to the likes of FIFA2006 and Pro Evo 5, but viewed as an alternative. It is now not only an excellent multi-player game with which to show your mates who is boss, but an enjoyable single-player outing as well.