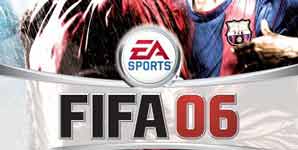 Where once FIFA dominated the football games market, in recent years it has been challenged and overthrown by the Pro Evolution Soccer series. The time has now come for the latest instalment in both series and this year EA Sports has placed emphasis on pure game play, no gimmicks such as '12th man' or 'first touch', just bang on fast, fluid, football action. There are teams from 20 leagues, 40 national teams, and over 15,000 players – all officially licensed, meaning no stupid names or kits. 1-0 FIFA.

In terms of presentation, FIFA is simply brilliant. The intro includes footage of some great football moments, the 'FIFA Flashback' plays commentary from outstanding goals, and the soundtrack features contributions from Oasis, Nine Black Alps, Embrace, and Hard-Fi to name but a few. Crowd chants are also brilliantly tailored to the team and ground, such as the singing of "You'll Never Walk Alone" at Anfield or Robbie Savage's name being bellowed out. The in-game commentary is the best of any game yet, at times repetitive but usually relevant to action taking place – so far FIFA ticks all the right boxes.

It is in the most important aspect of a game that FIFA fails so miserably. Games are slow, the animation seems lacking in frames, and it plays nothing like a football match. Player stats seem to have little effect on their actual performance – it doesn't matter if you're Henry or Crouch, either way you're not knocking the ball past a defender and beating him for pace. On the occasions that you do go clean through on goal, it seems even Thomas Repka can catch the likes of Samuel Eto'o and dispossess him. But say you do make it to be one-on-one with the keeper, what would you expect him to do? Close you down – but not here. The man between the sticks will gladly let you dribble up to the 6-yard box and tuck it neatly into the corner. Pathetic programming and not something that feels very rewarding. Another aspect that is completely unrealistic is the ability of almost any player to score long-range goals. Fair enough, you expect the likes of Lampard and Gerrard to fire a few in, but Craig Bellamy? Come off it.

Whenever a dead ball situation arises – goal kicks, free kicks – EA Sports has taken the ridiculous decision of freezing players until the game is restarted, making both attacking and defending much less varied. FIFA 06 also lacks authentic player reaction – when a corner is awarded, you'll see the attacking team trotting back toward the centre of the pitch first. A similar flaw exists in goal celebrations, a team that has just clawed a goal back will run off to celebrate, before the screen cuts to a sequence of them picking the ball out of the net, eager to get the game restarted. Though these might seem like minor gripes, the fact that PES4 presented these situations more realistically embarrasses FIFA.

On a positive note, FIFA 06 does offer an immense life span, with a good number of game modes including a fifteen-year management game that sees you controlling various aspect of the your chosen club's budget. Also included is a fully playable version of FIFA 94, which as it turns out, isn't much worse than the main game. For all the slick presentation and endorsements, EA Sports have failed miserably at providing a football simulation that plays like the real thing. It's slow, unrealistic, and doesn't even get near PES4, never mind the imminently released PES5.