Over the years FIFA has consistently managed to outsell Pro Evo even though the latter has widely been evaluated as the critics choice. You'd think EA would be happy with the sales success of the game but it appears that they also want to take Konami's crown of developing the greatest football game on the planet. A new development team and numerous gameplay changes provide what is by far EA's best effort so far, but does it do enough to knock Pro Evo off its podium? 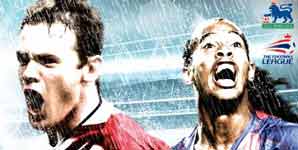 FIFA has more fully licensed clubs, leagues, competitions and players than John Motson could name if he was on 'You Bet!'. 21 leagues and a whopping 10,000 fully kitted out players to be precise. This option means for all those fans out there who support a team in a division lower than the Premiership they can instantly start a league cup run with their local heroes without having to spend 2 days editing a whole new team. (Or even if you fancy tinkering with a team from the Norwegian Tippeligaen you can do so)

The choice of game options is unbeatable due to all the licensed competitions, but it doesn't stop there because the management mode has been fully recycled. Due to the axing of EA's Total Club Manager you can now get thoroughly involved with an in-depth Manager experience. As well as the usual training and transfer matters you also have to deal with Media coverage, sponsorship and numerous other trials and tribulations that a masochistic middle-aged ex-footballer likes to go through on a weekly basis.
Player statistics and team tactics aren't as detailed or as easy to influence compared with Pro Evo, but the depth comes from the other areas stated.

As an added bonus you can check out a retro FIFA game from the Sega MegaDrive back in 1994. For some it will bring back a flood of memories, but for others it will be a very clear indication of exactly how far games have progressed in a decade! There are a few other cracking additions such as 10 great classic goals to watch and a selection of unlockable player biographies. They've thrown in a couple of other extras but its time to get to the point. What does it play like?

EA have openly admitted they went back to basics with 06 to try and replicate the real life style of football which revolves around pass, move and shoot. Fancy tricks, dummies and 'first-touch' are all still in there but it does appear they have concentrated on improving the general flow of gameplay. To an extent it has worked very well but there is still room for improvement. The goalkeepers have trouble catching a tame shot and it doesn't matter where you have a pop from because it almost always lands on target. Not a bad thing if you need to see goals to be entertained, but it takes away the aspect that you are totally in control of the flight of the ball.

It isn't easy to distinguish between the different skills of individual players either. Admittedly the world class stars such as Ronaldinho have an extra zip in their step but you don't get a clear difference in ability between a meathead centre back and a playmaking midfielder. These aspects hint that you're involved in an arcade game version of football rather than actually controlling your own team of 11 individuals. The ball passes around fluidly and you can tune your dribbling skills to take on an opponent but there's still something that just doesn't appear natural. Its difficult to put a finger on exactly what doesn't work because there are plenty of times when you create a sweeping move and tidy finish so things should be all gravy. But there not, it still doesn't feel as though you have to graft out a win or rely on a bit of luck to go your way to win a match. Little things that a football supporter relishes, as an England supporter I'm used to pain and suffering. But it feels even more special when it does finally come together and you beat Germany 5-1! With FIFA it seems that things are always more geared in your favour and once you've mastered the successful routines that's all you need to replicate to get results.

The graphics are top-notch and there are several decent cut-scenes but a general impression of the players is that they aren't as realistic lookalikes compared with Pro Evo. Maybe I just need to upgrade to a 40" flat screen HD TV but the font seems too small for a lot of the written detail too. Not a major gripe but after a few hours on Manager mode it can be a bit eye straining to read your messages and analyse a players abilities when negotiating a transfer.
The Clive Tyldesley with Andy Gray commentary and BGM are equal to the high calibre that can be expected from an EA production. But, the SFX on the pitch are a little dull and could do with tweaking or bolstering to make them more noticeable. When you're playing you want to feel that you're involved in the action and not just a spectator.

I think there will always be a divide between the 2 giants of the football gaming world and there will always be 2 huge fan bases to wilfully mop up the goodies. A debate between devoted Pro Evo and FIFA player's could run for hours with no greater outcome than "the other person is stupid and blind to the greater game". Personal taste rules and both games have shining attributes that warrant their massive global sales. From a personal point of view, give me the more realistic football experience over the one with all the shiny bells and knobs on any day. Good effort though EA, maybe 2007 will be your year.