My first impression when handed Fahrenheit was not one of optimism. Most games presented in movie format have disappointed me due to dull scenarios and sloppy game play. This offering has surprised and enthralled me from the word go. Writer and director David Cage has produced a movie game that will undoubtedly break barriers within the gaming world. 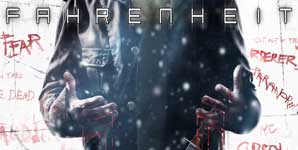 The game begins with a possessed man stabbing another to death in the bathroom of a New York diner. It unfolds that we as players will take on the role of this murderer, Lucas Kane. This is the beginning of a story, which will see the four main characters being controlled by the player. Along with detectives Carla Valenti and Tyler Miles and brother of Lucas, a priest named Marcus, we must play through differing scenarios in a bid to find out the meaning to this brutal murder. To progress through the game, play switches from character to character with each playing significant roles within.

As the game progresses we get an insight into the characters personalities and backgrounds. I found myself empathising with each person in a way that I haven't been exposed to within the world of games. The most intriguing aspect of Fahrenheit is the introduction of a mental health meter. Each character has fears and problems, which surprisingly enough crop up throughout the game. For example Lucas is constantly depressed and you must attempt to keep him out of total desperation by evading police and such. Equally Carla has issues with small spaces so it is only right that she is exposed several times to this horror.

Visually the game is impressive considering the sheer amount of content. The cut scenes are refreshing in that you don't watch them in disgust, you in fact feel part of the game. The voices are very well done which adds to the environment and ultimately the game play. The overall production throughout is of a high quality, which shows how important hiring the right people for the job is. The soundtrack is excellent adding to the overall flavour of the game.

The playability is surprisingly fantastic with enough differing objectives to keep the most cynical of gamers happy. Most of the important aspects of the game are controlled using the two analogue sticks, which was new to me and very welcome. Differing combinations are needed to combat crazed hallucinations and to keep Lucas from falling into the hands of the cops. All of the action is controlled in an original process, which will please seasoned gamers.

The storyline of Fahrenheit is one of intrigue and suspense, which, in some ways, is better than actually watching a film itself. Nice twists add to the interest factor, which will see this game finding a place in many hearts, and homes the world over. Having to control the pressure and stress levels of each character adds a fresh angle to an already fantastic game. Great game play mechanics and stylish production will undoubtedly see a sequel. Bring it on. Great game.