For the Eye Toy virgins out there, the Eye Toy is a webcam that sits on top of your TV. Said webcam shows your image within whatever Eye Toy game you happen to be playing and your movements reflect actions in the game or correspond to you touching icons on the screen. All of which means that, to someone watching you through the windows without a view of the TV, that all the waving, jumping and gurning means that you are either mentally deranged or on a bad trip. 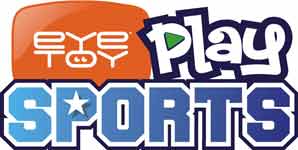 Play Sports features a variety of games that include a sack race, tennis, surfing, boxing darts, rowing, sumo wrestling and 95 other variations on a theme. Why variations on a theme? Well, because every game though slightly different in appearance involves either jumping up and down, waving your arms about or pushing an object back and forth to one another. Play sports was pitched as an evolvement of the Eye Toy genre but has in fact fallen in to the same category of all the other Eye Toy releases since the original - a slight variation on the same theme. There is nothing particular more sporty about this game in terms of the actions than any other Eye Toy outing apart from the presentation. Let's face it, waving and jumping for half an hour plus is pretty knackering at the best of times! The Eye Toy still fits squarely into the "Party" game title with the likes of Singstar where you try and beat your opponent either on points or to the finishing line. You can play the mini-games single player and record your best times in each game trying to beat your records as you go, but this is not going to keep you interested for long.

To a beginner, the Eye Toy is a novelty and as it is still original is quite appealing. If you have had an Eye Toy for a while then Play sports will keep you interested for a while , perhaps until you have seen all the mini-games to convince yourself that this is the case but there is not a great degree of longevity there, just another "look, we're on the T.V....again" moment.

The graphics are cartoony in appearance and the basic sound and music match this and they will start to drive you mad after a while if you are sober. Seeing as part of the target audience for the Eye Toy are the younger generations then you hope that would be the case. but you never can tell these days!

Don't get me wrong, the Eye Toy series was original on its release, is enjoyable if you're at a party or have friends around as something "different" to do, but by the umpteenth release the fact that the controls are about as responsive as a drunk stumbling home from the pub is quite annoying and the fact said drunk is likely to be the person best positioned to enjoy the game says something about the target audience, however what it is escapes me. And don't get me started that it's been wrapped together as something new when it's really a revamping of the old just in time for Christmas. The Eye Toy is certainly recommended for the young, for good old fashioned family Christmas fun or for a different angle on entertainment at parties or gathering (and the drunk!) and Play sports is probably as good as any of the other titles, but if you have any of the other titles then it's certainly nothing new.