Regeneration is the third game in the Evil Dead series of games based on the cult classic B movie horror trilogy Evil Dead. Yet again you take on the role of Ash Williams, voiced by the movie's own Bruce Campbell, through another chainsaw swinging, gun-toting adventure with the aim of carving up as many deadites as possible. Previous games in the series 'Hail to the King' and 'Fistful of Boomstick' were average games at best â so does Regeneration break the mould or does it stick to its B-movie roots? 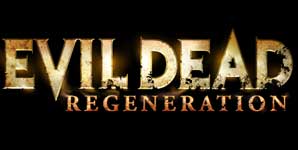 Evil Dead Regeneration follows Ash, the lone survivor of a camp who has discovered the Necronomicon - the book of the dead. Thought to have murdered his companions, Ash is arrested, convicted, and locked up in Sunny Meadows, an institute for the criminally insane. Ash's stay doesn't remain peaceful for long though - thanks to the perverted experiments of his own psychiatrist, Dr. Reinhard. Hell-bent on using science to harness the Necronomicon's powers, the mad doctor unleashes the book's all-powerful Evil on the world - releasing a new slew of Deadites, monsters and spirits, twisting reality into a hellish apocalypse.

Ash is soon paired up with his new sidekick Sam, a midget who has fallen foul of Reinhart's experiments and as a result has been partially changed into a deadite. Together Ash and Sam set off on a journey to try and stop the underworld invading this one.

Fans of the film will notice that Regeneration does not follow the events of the trilogy but acts more as a 'what if?' alternate reality. The game leaves out the third film of the series 'Army of Darkness' in which Ash is transplanted into medieval England (?) and instead takes a different tangent.

Overall the story holds the game together well and numerous cut-scenes push the story forward and add to the dark humour inherent in both the game and films.

Fans of the films may be a little disappointed that the game does not strictly follow the timeline of the films but for me it didn't affect my enjoyment of the game.

Graphics in the game are more functional than stunning â while the main character models are decently rendered the enemies and background locations are uninteresting and the colour scheme bland â yes, they are meant to be dark and brooding but for the most part they are just uninspiring.
Cut scenes are well done taking on a cartoony feel with Ash looking like, (albeit a younger, leaner and more muscular version of) his real life counterpart Bruce Campbell.

The graphics are never going to blow you away in this game but they are by no means horrible and still give rise to the occasionally jumpy moment.

Sound in the game is a real plus point â Legendary evil dead director Sam Raimi had a hand in the scripting and this really shines through, dialogue staying true to the feel of the films. Voice acting in the game is also superb, Bruce Campbell reprising his role as Ash and Ted Raimi, (brother of director Sam) taking on the role of your wise-cracking sidekick Sam. Dialogue throughout the game is pure tongue in cheek B movie horror and there are plenty of genuinely funny lines between Sam and Ash.

Background noises in the game are also up to scratch. Ash's chainsaw growls menacingly and his boomstick blasts away as expected. The screams and shrieks of the deadites as you carve them to pieces and fill them full of lead are also satisfying.

Controls in the game are easy to learn and everything seems to be in the right place to add to the gaming experience. Square fires your weapon of choice while circle swings your prosthetic arm attachment (chainsaw/harpoon gun). Preset combos come out on request leading to some pretty cool shotgun/chainsaw killing sequences.

As there can be lots of deadites on screen at once you also have a targeting mode, holding R1 allows a target to be selected and fired on. You can also make use of your new sidekick Sam by aiming and punting him at various enemies where he will commence to decapitate the unsuspecting zombie or subdue them for you to finish off!

Again nothing new or revolutionary with the control system but tight throughout the game.

The game takes place across ten different levels and you have to hack and slash your way through everything that moves in every level. In most circumstances you can not progress until all enemies are dispatched. The main update to the gameplay is the addition of Sam who helps you out fighting deadites and eventually you learn to possess him and use his small stature to gain access to previously blocked areas. As such the game does try to introduce a puzzle element but in most cases the solution is pretty obvious.

Fighting your way through the game is fun but at times can be repetitive and although there are a number of combos and weapons to use, gameplay is pretty standard start to finish.

The main game can be completed in 6-8 hours and most of the extras offered by the game (mainly video clips/artwork/interviews with the cast) will be found on your first play through. Unless you are a dedicated fan of the series the extras aren't really worth the extra effort to collect them all.
Overall the game is not particularly challenging and could be completed in a weekend session therefore it may be worth renting before you buy.

Evil Dead Regeneration is a decent zombie slicing adventure but by no means 'best in class' however, I found that it is very much like its B-movie roots. When you rent a B-movie horror classic like Evil Dead from the video shop you know exactly what you are getting; you're not expecting it to look stunning or wow you with effects or to have a complex involving story. What you do get is a straightforward blood and guts soaked horror with a dose of comedy tacked on â this is exactly what you are in for with Regeneration â a no-nonsense hack and slash which is a lot of fun to play. Also, I can't think of any other games where you play a one-armed shotgun and prosthetic chainsaw attachment toting psycho with a half dead, wisecracking midget for a sidekick â and for me that's a bonus!