The Dragonquest series of role-playing games is so successful in Japan that the Government banned the release of the game on weekdays as so many people were pulling sickies in anticipation of the game. 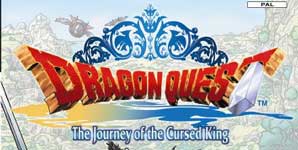 In Europe and Stateside the games have received a much cooler reception and often have not even seen release. US sales were boosted by the inclusion of a Final Fantasy XII demo; however the PAL release does not include the demo to much disappointment.

Journey of the Cursed King is the 8th game in the series and, like its stable mate Final Fantasy does not follow on from the previous instalment.

JotCK is the first fully 3D Dragonquest game and has the pedigree of one of the best and most loved RPG series ever – but is it good enough to make an impact in the RPG indifferent UK market?

Story
The adventure begins with an evil jester named Dhoulmagus stealing a mythical sceptre from the Kingdom of Trodain - Dhoulmagus then curses the Kingdom and turns the King of Trodain into troll and his daughter, the Princess, into a horse. You assume the role of the unnamed and mute hero, the only other survivor of Dhoulmagus' attack. That is pretty much all the introduction to the story you get before you set out on your quest with further details fleshed out on the way.

You are eventually joined by three other companions, Yangus, a tough, stocky former crook; Jessica, a girl from an upper class family and Angelo, a womanising, gambling Templar Knight. All have their own reasons for joining the quest and wanting to catch up with Dhoulmagus and each of the characters is fleshed out well.

Unlike many other RPGs these four are the only playable characters in the game and you will have a full team from pretty early on in the game.

The story is a pretty straightforward fantasy affair but it is so well told and presented that it doesn't really matter that you have seen similar somewhere else. While Final Fantasy games have a much more complex and involved story sometimes this can seem a little too pretentious whereas Dragonquest does what it says on the tin and does it well.

Graphics
The graphics in the game are outstanding throughout and have a unique visual style setting this game apart from numerous other RPGs. The game is set in a 3-D cell shaded world infused with vibrant colours and scenery. All characters animate fluidly and each town and its inhabitants have their own mannerisms and architecture. There are hundreds of crazy enemies and bosses which again are fantastically designed and animated.

This is truly a beautiful game and it will feel like you are controlling a manga fantasy cartoon, this is not entirely surprising given that the games artist is Akira Toriyama, the guy also responsible for the Dragonball Z cartoon and games.

Sound
The background music is in keeping with the Middle Ages feel with some classic sound effects and tunes returning from previous DQ games. One addition from the Japanese release is the addition of voice acting in English – Not American English but the Queen's English!!! Voice acting in the game is superb, all characters are voiced by English actors or have European accents perfectly fitting with the timeframe and setting. I think American voice over would have severely damaged the feel of the game so big thumbs up to Square for this decision.

Gameplay/Controls
DQ could be described as an 'old school' RPG or RPG in its purest form. There is no fancy active time battle or judgment rings etc – this is a purely menu driven RPG of old – reminiscent of Final Fantasy VII.

Battles are turn based with the majority occurring randomly as you explore the world, however they are not so frequent that they interfere with your progress too much. In battles you have the usual attack, items abilities and spells at your disposal – all of which expand and increase in power as you progress. Also at your disposal is a command called 'psyche' which increases your character tension and while forgoing a turn will allow for a more powerful attack the next round. This adds an element of strategy and comes in handy against some of the bosses.
Each of the four characters can learn different weapon abilities by spending skill points obtained as they level up. This increases your proficiency with the given weapon and also allows you to learn various attacks and abilities. Also each character has a unique personality ability allowing them to learn special attacks and healing. Many of these attacks are quite funny and very inventive – from Jessica's 'sex appeal' whereby she wows enemies into paralysis with her ample charms to Angelo's arrogant snigger and Yangus' intimidation and thieving abilities. How you allocate the points is entirely up to you and each route has its strengths and weaknesses. The way in which you allocate skills does significantly determine the roles each character will play in your party as one route may lead to Angelo being a full time healer/mage whereas other ways make him more proficient in battle. In any case it is really up to you and no route will hinder your progress in the game too much but does add a good level of character customisation.
The item synthesis is also very simple and takes place in the alchemy pot – you can combine two and then three items to make stronger weapons and armour.

One thing to be aware of in DQ is that if you are not prepared going into battle or travelling around you can be made to pay – boss battles can be tough and are not usually preceded by a handy save point – not only that but random encounters can also be testing at all stages throughout the game. Once party members die in battle they can only be revived at a Church making it even more difficult for the party with a man down. Also regeneration of MP is difficult as while HP herbs are freely available to recover health MP items are much scarcer.
If your party all die in battle you can continue from your previous save point but you lose half of your gold and have to trek back through the dungeon and enemies – often time consuming.

Being successful in battles does require you to be at a decent level and to have good enough equipment and be prepared!! DQ is not a levelling up fest but you need to ensure that you don't run from too many battles.

The main story is pretty lengthy clocking in at around 50-60 hours - however there is a significant amount of side quests and post game quests to take part. The game definitely represents value for money and a decent challenge.

There is not much to say about controls, the game is for the most part menu driven and dead easy to control, my only gripe is the slightly laborious inventory system.

Conclusion
DQ: Journey of the Cursed King is the best pure RPG on the market – Superbly presented and a huge amount of fun to play while challenging to boot. While it may be a bit more traditional for some this is the zenith of old school RPG gaming. Overall I give it…………………………………………