The Belkan War is the sixth major PlayStation release of the Ace Combat series and the follow up to the much heralded Ace Combat: The Unsung War. In a nutshell, and a trend that has been set quite a few times recently with other titles, the latest update is the best in the series yet. just. The release has built upon what was good about its predecessor, whilst almost annoyingly, it feels just slightly too familiar as you await the perceived revolution the PS3 could potentially bring to the series. 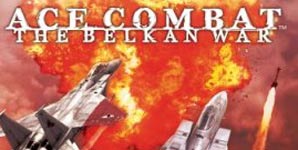 Your cockpit character in the "Belkan War" is a mercenary pilot for hire drafted by the Republic of Ustio to fight off the invading armies of their neighbours Belka. The storyline is once again illustrated in documentary form with random narratives and interviews that keep you up to date with the war. This format is either brilliant or a distraction from the action depending on your point of view. If it takes you any longer than a few missions to get to grips with the plot, then it will probably be the latter but it is a nice idea nonetheless as it is a pretty good plot if you have the patience to listen.

In the Belkan War, and new to the Ace Combat series, is a new interactive sub-twist to the narrative. Your decisions during missions, relating to who you attack, whether you follow the mission brief to the letter, how random you are, all effect your reputation as a pilot and will alter how the subsequent missions unfold, hence altering the storyline itself. This is pretty neat and keeps things interesting. Top Gun or Rogue Squadron - you decide! All of which adds to longevity of the game - if you play the game as a goody-two-shoes the first time around, playing it as a bad ass the second time round will alter your experience. This longevity is added too by unlockable goodies. You already have at your disposal a fleet of recreated real life aircraft but you also have the ability to unlock more, different modes and medals. The game is further supplemented by an excellent split screen two player mode which offers more than just dogfighting. The only downside is that there is no net play, but again you feel that the PS3 experience awaits you.

In terms of gameplay, there is still that nice mix of flight simulation gameplay and hard hitting, fast and furious arcade-esque action. New to the Belkan War is improved AI, that both incorporates your enemies but perhaps more importantly, your wingmen and squadron in general. They are a lot more responsive to your commands and take more of front seat if you are flying a bit randomly in an attempt to affect the storyline. or you are just crap, either way really. On top of this, you will now come across ace pilots as the "boss" who tend to sneak up on you at the end of your mission to try and blow you out of the sky just when you are starting to see the light at the end of the tunnel. As usual in war flight sims, missions are generally straight forward in that it is a dogfight or a bombing run but what Ace Combat does well is to alter the environment to keep the missions fresh - making it dark, making your room to manoeuvre tight for example or simply giving you the choice of which stage of an overall mission to participate in.

The graphics are excellent and this is generally a standard for Ace Combat titles. The planes and the scenery are incredibly details and it makes you wonder how much better the next generation will look. Smoke trails of downed plains, explosions, clouds and the wind effecting them all look extremely good.

As I mentioned in opening, there is nothing spectacularly new in "Belkan War" but all tweaks are effective in progressing the series further. This is definitely worth a peak if you did not catch "Unsung War" or are new to the Ace Combat titles. If not I would suggesting hanging on until Ace Combat wings its way on to the PS3.