Kingston, Ontario has spawned its fair share of musical talent, some of them known mainly in Canada, such as The Tragically Hip and Canadian Idols' Ryan Malcolm, and some have risen to international acclaim, Bryan Adams and to a lesser extent Bedouin Soundclash. It is also a renowned hub of intellect, famed for its well-established universities, making the student haunts of the city a comparatively essential stop off for touring groups making the journey between Montreal and Toronto. So with all of these local influences floating around it is interesting to hear what the debut effort from PS I Love You has to offer. Here's a clue, it doesn't sound like 'Everything I Do (I Do It For You).' 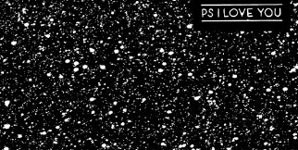 The duo, guitarist/singer Paul Saulnier and drummer Benjamin Nelson, burst onto the music scene with 2009's 'Facelove,' a track that definitely stands out as the zenith of the album. Following off from the introductory riff with the Frank Black-like howl from Saulnier about a past lover, which he essentially cannot be arsed with any more, "Your love is like a delicious glass of wine / Thrown in my face," he laments before diving into a coruscating solo for the rest of the song.

The heady heights of 'Facelove' are rarely met again, yet the album remains solid throughout regardless of this. During '2012' the thrashing of Saulnier's guitar, which easily takes centre stage in the album, makes it hard so tell if he is envisaging the end of days or just slating the Roland Emmerich epic. Either way, none of this matters when the distorted whirls of his guitar demand your attention more than anything else, a demand that isn't too hard to give into to. 'Butterflies and Boners' has an essentially Daydream Nation-era Sonic Youth quality, of course the vocals remain far from similar to Thurston Moore or Kim Gordon, still it isn't too hard to distinguish who Saulnier's guitar heroes are, with the continued use of the fuzz-heavy No Wave/Grunge style distortion. The duo have even created a bonafide indie-dancefloor filler with the penultimate track 'Get Over.' The fuzzy guitars hooks are accompanied perfectly by the woos and handclaps in the background to help craft a party-perfect noise pop song not too dissimilar to early Rapture releases.

What else is there left to say other that these two Ontarians have produced an album of incessant quality that rarely misses a beat. The vocals are drowned out through the majority of the album, yet Meet Me At The Munster Station is intentionally set out as a guitar based album. It is a no-holds-barred noise pop album that delivers on every track that could easily be played from start to finish at an indie party night without complaint. The final product might seem a little under-developed, but production quality is usually a second thought for debutant rock albums and always has been. Maybe with a higher gloss finish the duo may even begin to challenge the Bryan Adams' crown as Kingston's favourite sons. 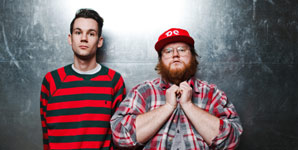 PS I Love You - Meet Me At The Muster Station