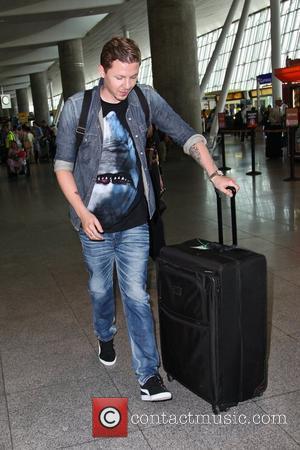 British rapper Professor Green has risked the wrath of his record label bosses by publicly criticising them in an angry online rant.
The hip-hop star has taken aim at Emi executives in a series of scathing posts on Twitter.com, claiming his track Never Be a Right Time, the second single from his 2011 album At Your Inconvenience, was "rushed" and the video for recent release Remedy was "a month late". He goes on to suggest he is suffering similar problems with his new track, Avalon.
He also fumes about his label's fees, alleging they take 25 per cent of his earnings from live shows, but rarely even attend the gigs.
Professor Green writes, "Why would your own record label hinder you? Answers on a postcard. I just can't help but question why some people have jobs. All I do is work, so I get extremely p**sed off when people don't do theirs.
"Dignified silence is pointless. A rushed second single, the Remedy video a month late and now similar problems with the Avalon video unfold... How would you feel if a company taking 25 per cent of your earnings weren't doing their jobs properly? Would you pay someone not doing their job?... A live gig = 10 per cent to agent, costs and expenses, 20 per cent management commission then 25 per cent to a label who hardly even come to gigs let alone help.
"That's the industry, which actually didn't seem that bad when just getting simple things done wasn't a blood from a stone scenario... A lot of artists feel the same..."
However, the rapper insists the dispute isn't just about money, adding, "Just to reiterate something for the stupid, my problem isn't that they take that money, it's that there are people not working for it... There are a lot of people who are amazing at their jobs (at) Emi and even more frustrating... is the s**t they have to endure for having an artist's best interests at heart."