Professor Green took a swing at a fan on Friday night after he was shouted at while performing in Durham. 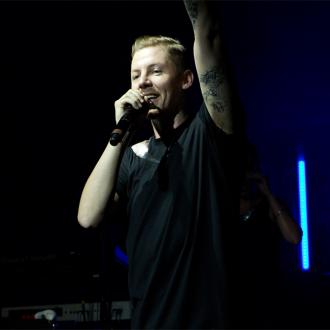 The 30-year-old rapper was caught on camera getting into a scuffle in the middle of his gig at Durham University's Student Union Welcome Ball after a member of the audience shouted abuse at him.

However, the scrap didn't last for very long as the 'Remedy' hitmaker - whose real name is Stephen Manderson - returned to the centre of the stage to explain why he ended up swinging his arms at a fan.

He told the audience: ''That's what happens when you call me a c**t. Are we going to have a f***ing good time tonight or what?''

A representative for Pro Green, who is married to reality TV star Mille Mackintosh, confirmed that the star had got into an altercation with a fan during his set and the student was later escorted off the premises.

The spokesperson told the Daily Mirror newspaper: ''During Professor Green's live show at Durham University on Friday night, a student verbally abused Green repeatedly and then went to strike him. Green reacted. The student was subsequently escorted out from the venue for being too drunk. Green carried on the show to perform his full set.''

Pro Green then appeared to reference the aggressive situation on Twitter after the show but later deleted the post from his social networking site.