British Rapper Professor Green Choked Back Tears During A Live Tv Interview On Thursday (10sep15) As He Recalled His Final Conversation With His Estranged Father. 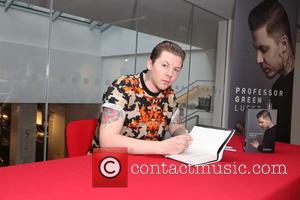 The Read All About It hitmaker has often spoken of his dad's suicide in 2008 and he is even patron of the Campaign Against Living Miserably charity, which aims to help young men who are in danger of taking their own life.

He appeared on U.K. show This Morning to promote his new memoir in which he details the tragedy, and he welled up as he recalled how he parted with his father on poor terms after a tense last conversation with him.

Green said he spoke with his dad, who walked out on his wife when Green was a child, around Christmas 2007 to arrange a reconciliation but got annoyed when his father treated it as merely a family get-together.

His voice quaking with emotion, the hip-hop star said, "I lost my temper and it's the first time I'd ever really told him how I felt. I said, 'You know, it's not about me coming to play happy families, this is about me and you sitting down as adults and talking about everything that's happened and finally putting it to rest.'

"And he started to stutter and I couldn't respond rationally any more. I'd put myself on the line again having said I never would, and I just went, 'You know what, if I ever see you again I'll knock you out'... (That was the last I heard) until a Wednesday morning when my nan came in my room and said, 'Dad's hung himself.'"

During the interview, the rapper also avoided speculation over the state of his marriage to U.K. reality TV star Millie MACkintosh, simply praising his wife for helping to keep him emotionally balanced.