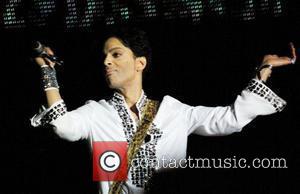 Soul superstar Prince drew a record number of fans to the 2009 Montreux Jazz Festival in Switzerland at the weekend (18Jul09) after selling out his two shows in minutes earlier this month (Jul09).
Eager fans snapped up more than 7,000 tickets for the singer's headlining gigs at the 43rd annual event in just seven minutes and 58 seconds when they went on sale on 4 July (09). The quick sale broke Prince's own festival record, set in 2007, when he sold out 4,500 tickets in 10 minutes.
The Purple Rain star didn't fail to delight - he rocked crowds with his catalogue of hits in a pair of shows on Saturday as he brought the prestigious festival to a close.
And his showstopping performances helped to boost attendance figures - organisers claim this year's festival was "crowned with success" with 230,000 music fans coming out to support the series of shows, an increase of 10,000 from last year's (08) figures.
The 2009 line-up saw concerts from artists including the Black Eyed Peas, Alice Cooper, Wyclef Jean, Lily Allen, Marianne Faithfull, B.B. King and Herbie Hancock.