Is Prince preparing shows in the UK?

George and Harry listen up: there's another Prince in town and he's got more 'Groovy Potential' than you. After it was reported that that singer had been spotted backstage at Kings of Leon's Shepherd's Bush gig, 'The Purple One' has now confirmed his UK presence with a series of shots entitled "LONDON."

Posting from the Twitter account named after the band he's been recently touring with, 3rdEyeGirl, the star began to learn the art of the Tweet with the standard "selfie," the food shot, a video post and now - the cherry on the cake of Twitter ubiquity - some travel shots.

However, Prince's travel shots have stirred up a certain excitement amongst UK fans. Characteristically elusive and with a well-publicised derision of the internet, taking to Twitter signals a big change of heart from the 'Raspberry Beret' singer. 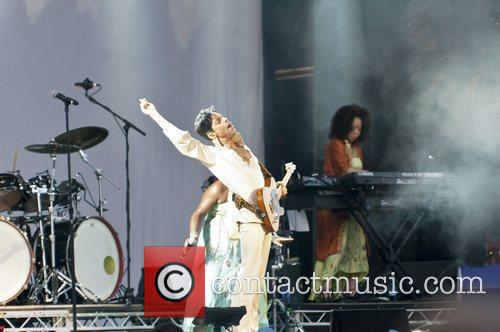 Why Is Prince In The UK?

The first of the shots shows some kind of VIP pass. The writing is barely legible but we can see the words "Prince" and "studio 1" stirring up excitement that the 55 year-old might be recording some new material with 3rdEyeGirl in England. The second snap looks like it could be printed in a tourism brochure and shows the three members of the band looking cheerful against a backdrop of red buses.

The other photos show the band - Donna Grantis, Hannah Ford and Ida Neilsen - tuning up their instruments and getting ready to play, but Prince is absent from all of the shots.

The band have recently released an image via their website revealing the cover artwork for their new single, 'Breakfast Can Wait.' The cover shows comedian Dave Chappelle dressed as Prince carrying a plate of pancakes in purely hilarious style.