Charlotte Elizabeth Diana is the name chosen by Prince William and Kate Middleton, the Duke and Duchess of Cambridge, for their second child. The announcement from Kensington Palace comes two days after the birth of Charlotte on 2nd May.

The Royal Princess has been named Charlotte Elizabeth Diana, Kensington Palace announced on Monday (4th May). Charlotte, who is fourth in line to the throne, will be known as Her Royal Highness Princess Charlotte of Cambridge. 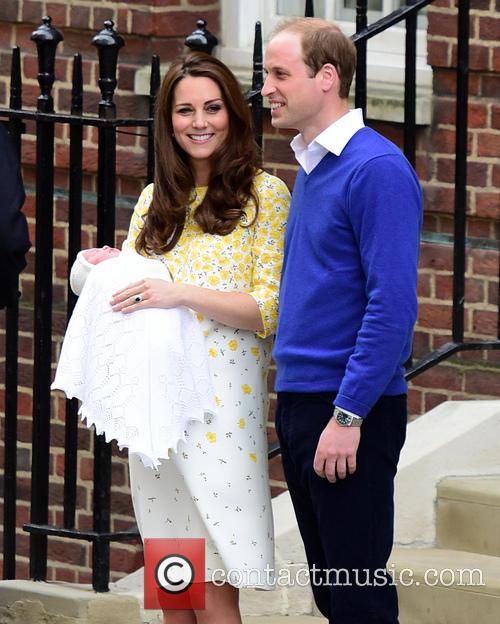 The Duke and Duchess of Cambridge with Princess Charlotte outside the Lindon Wing on Saturday (2nd May).

The Princess was born on Saturday (2nd May) in the Lindo Wing of the St Mary's Hospital in London, weighing 8lbs 3oz. She is the second child of the Duke and Duchess of Cambridge, Prince William and Kate Middleton. Their eldest child, George, was born in July 2013.

Prince George was seen visiting the Lindo Wing along with his father on Saturday afternoon. George was "very excited to meet his sister", a source told Us Weekly. The source provided further insight into George and Charlotte's first meeting. Although the Prince was excited, it was thought that he may have been "shy around the new baby but "everything went well" when the siblings met for the first time.

George returned home to Kensington Palace but other visitors to meet the new Princess included Prince Charles and Camilla, the Duchess of Cornwall, and Kate's parents, Michael and Carole Middleton. Prince Harry missed the birth as he returned to Australia to finish his secondment in the country's armed forces, as the BBC reports.

Charlotte's first public appearance came when the Royal couple appeared in the early evening outside the Lindo Wing, holding their new baby. Photographs of Charlotte were immediately shared around the world and congratulations offered to the Duke and Duchess. Kensington Palace has been sending out regular updates including thanking the hospital staff and well wishes for their help and support.

There have been a number of Charlottes in the history of the British monarchy. Perhaps the most famous is Queen Charlotte, the wife of King George III. However, Royal historian Hugh Vickers Princess Charlotte has been named after a former Royal and that the Royal couple simply "liked the name".

"I don't think she is burdened by any history associated with it and to be honest I think they just chose the name because they liked it, which is what they do and what we respect about them," Vickers told the BBC. "We historians can always find someone called Charlotte but I think basically they just liked the name."

The Duke and Duchess of Cambridge are delighted to announce that they have named their daughter Charlotte Elizabeth Diana.

The baby will be known as Her Royal Highness Princess Charlotte of Cambridge.