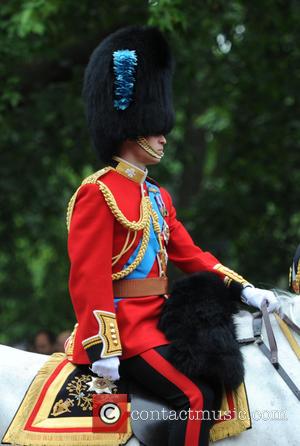 The two-month-old daughter of Prince William and Catherine, Duchess of Cambridge was baptised on Sunday (05Jul15) while her parents and other high-ranking royals, including Queen Elizabeth II, her husband the Duke of Edinburgh, and William's father Charles, Prince of Wales looked on.

Catherine's parents, Michael and Carole Middleton, were also in attendance, along with her siblings Pippa and James. Prince William's brother, Prince Harry, is currently in Africa and could not attend.

Five of the royal couple's closest family members and friends were named as the baby girl's godparents.

A statement from representatives at Kensington Palace reads: "The Duke and Duchess of Cambridge have asked the following people to be godparents to Princess Charlotte, all of whom are friends or family of The Duke and Duchess of Cambridge: Miss Sophie Carter, Mr James Meade, Mr Adam Middleton, The Hon. Laura Fellowes and Mr Thomas van Straubenzee."

The newborn wore a replica of the lace and satin gown that Queen Victoria's eldest daughter, Her Royal Highness Princess Victoria Adelaide Mary Louisa, was christened in in 1840. Her older brother, Prince George, wore a red and white Rachel Riley outfit that mirrored an ensemble his father wore in 1984, when he first met his baby brother, Prince Harry.

The service consisted of two hymns and two anthems, chosen by the baby's parents. The hymns were Praise to the Lord, The Almighty, which was sung in Westminster Abbey at the 60th anniversary of the coronation of Queen Elizabeth, and Come Down, O Love Divine and the anthems were I Will Sing With The Spirit and God Be In My Head.