Britain's Prince Harry has killed his first Taliban commander during an attack in October, one of his comrades has revealed. 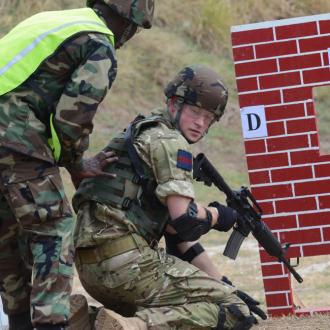 The 28-year-old royal - who is currently serving on the frontline in Afghanistan and is nicknamed Big H by his comrades - unleashed a devastating 100lb Hellfire missile on the chief during an attack in October.

One of his comrades told The Sun on Sunday newspaper: ''We were on patrol and the Apache helicopters were called in. We heard this posh voice come over the radio and knew it was Big H. they were tracking a Taliban leader - he was commander level.

''The Apache then let off some Hellfire missiles and its 30mm cannon and 'boom'. It was Big H all the way.''

Harry - a gunship co-pilot - is on tour in Helmand and has been flying daily combat missions helping ''troops in contact'', the code given when ground forces are engaged by enemy fighters and he has become a very popular figure with his comrades.

The insider added: ''I met him in the cookhouse. I saw this bloke standing in line and I went, 'That's Big H.' He's like a normal squaddie. All the guys in Afghan have so much respect for him and love him.

''Big H is a legend, he's been out in Afghan and he's doing the business. All the guys love him - he's Big H. He likes a drink and a laugh and he's one of the lads.''