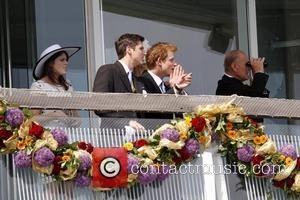 Prince Harry may have been linked with the lingerie model Florence Brudenell-bruce, but he appears to have caught the eye of Transformers star Rosie Huntington-Whiteley. The actress revealed her love for Prince Harry during a recent appearance on Live! With Regis And Kelly.
The 24-year-old Victoria Secret model said she is "obsessed" with the Royal, explaining, "I'm waiting for my proposal. I keep writing. I think he knows how obsessed I am. Well, he does now. He's so handsome". Rosie claimed she could picture herself walking down the aisle at another Royal wedding, urging, "Come on Harry!" Despite her love for the 26-year-old, the model-turned-actress is still in a serious relationship with the British action star Jason Statham. Appearing on the chat show to promote her new movie 'Transformers 3: Dark of the Moon', Whiteley was left blushing after host Regis Philbin held up a copy of Maxim Magazine's 'Hot 100 Women' issue, which features the model on the cover after being voted number-one. Rosie joked that she was thinking about the 79-year-old during her photo-shoot, saying, "That's what got me in the mood for all of it. I had some pictures in my dressing room of you. You're so much more handsome in real life".
Prince Harry has been linked to a number of high profile women in recent years, most notably Kate Middleton's sister Pippa Middleton. Despite being photographed together numerous times, the pair insist they are just friends.