As summer edges itself into our periphery, as does the annual build-up of festival season. Entering its 16th year, Primavera Sound has grown vastly from its humble origins in 2001.

Situated in Barcelona at Parc del Forum by the seaside, it's garnered international acclaim for obtaining some of the most diverse line-ups in the circuit, accommodating for some of the most iconic and internationally known artists as well as celebrating independent and underground music. It provides an inter-generational space for music lovers and festival-goers the world over.

The main festival this year is spread out over four days, beginning on the 1st of June and ending on the 5th. Throughout that time-frame well over 200 artists will perform at one of the most sought after festivals of the summer, which has now completely sold out. Spread out over nine stages (including a Hidden Stage), Primavera Sound will be bringing once again an eclectic line-up to the sunny shores of Barcelona.

Providing one of the most consistently strong line-ups a festival has been able to maintain in recent memory, Primavera Sound is internationally acclaimed to no one's surprise. Picturing oneself bathing in the Mediterranean sun, with the sea breeze cooling you all while listening to some of the best working artists perform - that sounds like the summer dreams are made of.

Contactmusic will be there to cover the festival once again, and with a little bit of homework and arguments over some frustrating clashes, here are, in no particular order, a handful of artists we are most looking forward to checking out at the 2016 edition of Primavera Sound:

Radiohead, Friday, 3rd June, Heineken Stage:
The Oxford based English art-rock titans have returned from a five year hiatus after solo projects with the surprise release of their ninth album 'A Moon Shaped Pool' (find our review here). Some of their shows have gone down in history as the greatest live performances ever, and to hear them perform new material at their first festival performance of the year alongside a back catalogue as rich and diverse as theirs - this cannot be missed.

LCD Soundsystem, Thursday, June 2nd, Heineken Stage:
After the initial shock of a Christmas single released for Jesus' birthday in 2015, LCD Soundsystem are back after announcing their death back in 2011. And by the sound of how their performances have been going state-side, haven't changed a bit in terms of the energy they bring to the stage (watch their live DVD at their 'last ever' show at Madison Square Garden in 2011 if you haven't). With music as consistently great as theirs, with hits such as 'Dance Yrself Clean', 'All My Friends', 'Daft Punk Is Playing At My House' as well as countless others, it's sure to be one of the highlights of this years festival. As of yet they haven't played any new material considering an album is meant to be on the way. Maybe this will be the place where they are finally christened.

Goat, Wednesday, June 1st, Primavera Stage:
Goat are surrounded in a mystique and anonymity which has provided intrigue and charm to their presentation and sound. Steadily gaining a fan-base much farther than their alleged beginnings in Korpilombolo in Sweden, where supposedly witch doctors and voodoo thrived prior to Christian influence (which is where their primary influence apparently derives from). With only two albums under their belt, Goat are said to be one of the most invigorating live bands of recent memory. An experimental fusion of psychedelic rock and world music, this should be an electric set.

Daughter, Friday, June 3rd, Heineken Stage:
London-based indie folk trio Daughter have done incredibly well since breaking out with their debut album 'If You Leave'. Currently touring on the back of their wonderful second album 'Not to Disappear' released back in January (find our review here), we can't wait to see how beautiful this sadness will translate live.

PJ Harvey, Saturday, June 4th, Heineken Stage:
PJ Harvey is a British treasure when it comes to her contribution to their musical heritage. Polly Jean however is a single-minded powerhouse who has reinvented her persona relentlessly. Being the only person (and first solo female act ever) to win the Mercury Prize more than once with 2001's 'Stories from the City, Stories from the Sea', and 2011's 'Let England Shake'. Returning this year with 'The Hope Demolition Six Project' (see our review here) which was met with critical acclaim. Multi-instrumentalist and on the edges of legendary status, this may just be PJ Harvey's year.

Kamasi Washington, Thursday, June 2nd, Auditori Stage:
Jazz maestro Kamasi Washington has worked with an incredibly eclectic and exciting amount of artists. Ranging from Herbie Hancock, Lauryn Hill, Snoog Dogg and featuring on Kendrick Lamar's highly acclaimed 'To Pimp a Butterfly', he has branched out and released a tour-de-force of a debut album 'The Epic', which is a 3-hour extravaganza nothing short of masterful. Signed to Brainfeeder alongside fellow jazz revivalists Thundercat and Flying Lotus, Kamasi Washington is bringing jazz back to the foreground. Considering that as a rule jazz always sounds better live, we cannot wait to see how this sounds.

The Avalanches, Friday 3rd and Sunday 5th June, Ray Ban Stage and Sala Apolo Stage:
Another surprise return in 2016 is the Australian wonders that are The Avalanches. Their first and only album 'Since I Left You' was released way back in 2001, and they haven't performed live since 2007. Primavera Sound is one of three festivals to have them booked so far, and to have two chances at this years festival to experience euphoria with a crowd who might be more ready for this than they are, you would be a fool to miss out on this moment.

Of course this is only the tip of the ice-berg that is Primavera Sound 2016, as there are countless artists ranges from the likes of the electro-trash and gender-defying Peaches, to the legendary Brian Wilson. Who will be performing The Beach Boys' iconic album 'Pet Sounds' in full on the year of its fiftieth anniversary. Find the rest of their line-up on the official website here.We hope to see you there, and for your safety please remember to drink sunscreen and wear beer. 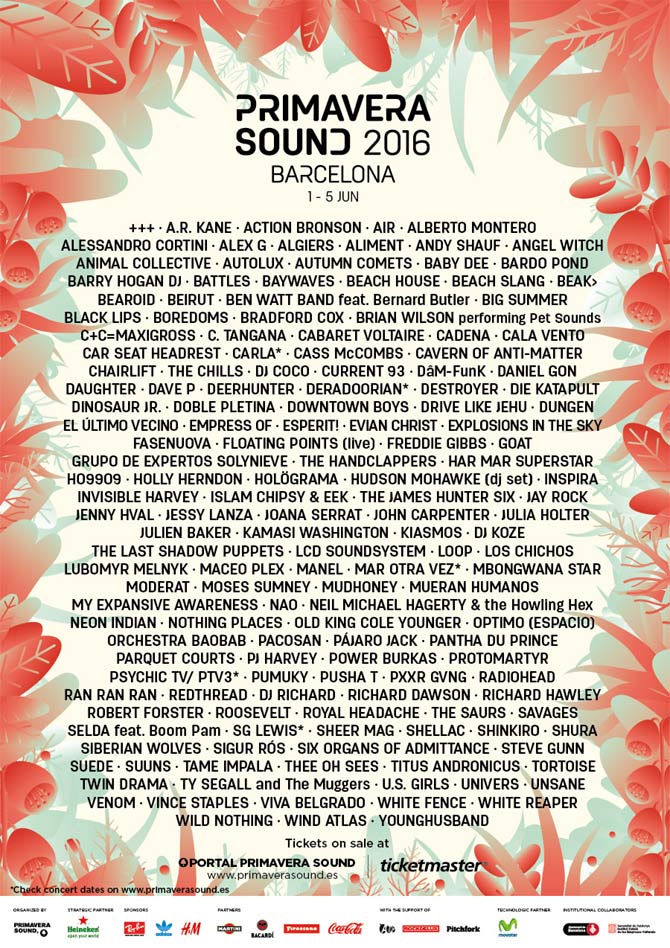