Not many festivals can claim to have snowballed on the same scale as Primavera Sound. Beginning its life as a 'boutique' event back in 2001, it attracted a thoroughly decent 8,000 people. And yet this year, the promoters expect 74,000 to descend on Barcelona from the 27th-30th May, making this one of the most colossal festivals in Europe. What the hell happened there? 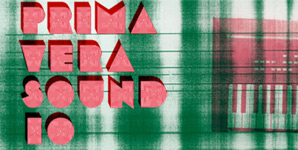 Part of Primavera's wild popularity lies in Barcelona's itself. Its near-perfect mix of sea, sun, city, nightlife and culture meant it could never stay a well-kept secret. But there has to be more than just the pull of guaranteed sunshine for nearly 75,000 people to keep coming back.

Well, Primavera promises that, though its attendance has swelled to the size of an army, it still remains 'faithful to its original artistic idea.' Looking at this year's line up doesn't cast much doubt on this. Boasting acts as seminal and diverse as Yeasayer, The Fall, Pixies, Diplo, Les Savy Fav, Gary Numan and Grizzly Bear, amongst a legion of others. It would suggest that as the cliché goes, there is something for everyone.

You don't even have to watch bands in the arenas. The initiative 'Primavera in the City' means you can go see acts perform in the beautiful Parc Joan Miro, filled with the sculptures of one of Barcelona's most colourful artists. Or if daylight doesn't appeal, there are several bands playing down on the city's Metro, at the Sagrada Familia and Passeig de Gracia stations.

Its sheer size means that the main festival site is now 20 mins from the centre of town, at the Parc Del Forum. It's not a short walk from the centre (around an hour), so most will want to take the Metro (www.tmb.net) or make use of the shuttle bus at night, running every 10/15 mins.

As for the main part of the action, you can bet that the more legendary acts such as The Fall, Pavement and Orbital will grace the San Miguel stage (cap. 25,000). And proving what a great year it has been for American music, Pitchfork's stage will be showcasing the choicest of the acts currently making themselves heard across the Atlantic. See Surfer Blood, Cold Cave or Real Estate if you need any further persuasion. 'After hours', you can get your rocks off (and your dance on) in the Vice tent (where else), which will see the likes of Boy 8-Bit and Fake Blood raise mischief until silly o'clock.

As the festival starts at 6pm and goes on through the night, you might even stay up long enough to see the sun rise over The Med. Meaning after a couple of hours much-needed recovery, you've got the day to explore one of the world's most exciting cities. Sounds prime for the taking to me.