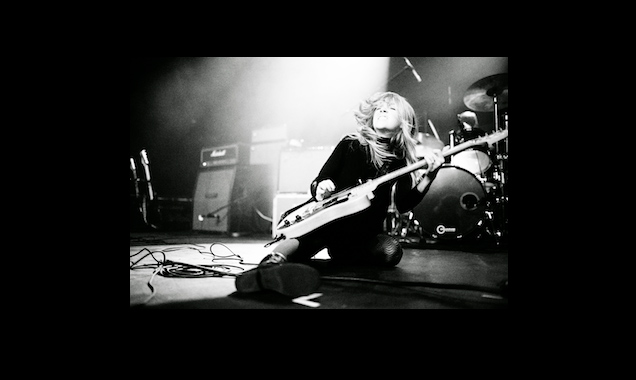 Austin, Texas 3 piece UME (pronounced "ooo-may") are set to release their brand new album 'Monuments' in the UK on June 9th through Dangerbird Records.  This huge, raucous and passionate record, produced by Grammy award winning Adam  Kaspar (QOTSA, cat Power, Nirvana, Foo Fighters) is the bands first ever release over here in the UK, and will see them venture here for the first time ever for dates in the summer.

The first set of these dates can now be announced as supporting the mighty , legendary Black Sabbath in Hyde Park on July 4th, which will be the bands first EVER UK live show. Before then, the band are touring the US with Circa Survive

UME frontwoman Lauren Larson was also recently, personally invited by Nancy Wilson (Heart) to perform with her at Acoustic 4-A Cure Benefit at The Fillmore In San Francisco on May 15th. Along with Sammy Hagar (Van Halen), James Hetfield (Metallica), Billie Joe Armstrong (Green Day), Joe Satriani, and more!

A bit about the band - For UME, music is the embodiment of contradiction. The Austin band's powerful rock songs contain a multitude of opposing juxtapositions, balancing elegance with brutality, strength with fragility, ferocious metal and sweet melody. These paradoxes resound through the trio's new album, 'Monuments', a collection of songs that re-imagines heavy music and is as beautiful as it is massive. When the musicians began writing for the album, after touring over 200 dates in support of their acclaimed debut 'Phantoms', the emphasis was on translating the impassioned force of Ume's momentous live show onto a recording - both sonically and emotionally.

Unrelenting and impassioned force that has made UME an acclaimed live band has finally been captured on the beautiful and massive new record called 'Monuments'.

Recorded with Grammy-winning producer Adam Kasper at Robert Lang Studios and Studio X in Seattle, WA, 'Monuments' is UME's most colossal sounding recording yet. The guitars are heavier, the rhythms more powerful, the vocals and song writing bolder and more intimate. From the first blast of the opening track "Black Stone," there is no doubt this is a record driven by guitars dropped to D, yet one that is also not afraid to subvert rock conventions.

"This band has always been about trying to reimagine heavy music," says Lauren who has been playing guitar in DIY punk bands since age 14. "During recording we opened ourselves to rethinking heavy music both sonically and emotionally. I learned to let go and take risks, something I could embrace when playing live, but that I was never able to do in the studio."

The result is a record that pummels as it explores an emotional range that most bands this loud don't touch, confirming why UME live has been described as attacking "with an intensity on par with Mastodon and a vulnerability reminiscent of PJ Harvey." Across 12 raw and honest tracks, Monuments delivers a melodic, visceral ferocity (see: "Too Big World" and "Chase It Down") that's deftly balanced with moments of wrenching lyrical clarity, as on "Gleam," a dedication to Esme Barrera, one of Lauren's fellow Girl's Rock Camp volunteers who was murdered during the writing of the record.

"Monuments began as an attempt to deal with loss, yearning, and struggle," says Lauren. "But it became a process through which I learned to appreciate and celebrate this life and making music again."

Lauren and Eric began making music together after meeting at a skate-park in high
school. Lauren was a guitarist playing in her first punk band Twelve Blades -- a politically charged grindcore band from a small Texas town. Years later the couple formed UME with long-time friend Jeff Barrera. Navigating between Lauren's PhD pursuit and two distant states, they played a couple hundred shows, opened for bands like Arcade Fire, Polvo, and The Fall, and began growing a fan-base that included the likes of Gang of Four's Dave Allen and Joan Jett

2011 dawned and so did a new era for the band. Ume welcomed new powerhouse
drummer Rachel Fuhrer, was named one of the top unsigned bands by Rolling Stone
Magazine, and released their critically acclaimed Phantoms. Since then, the trio has hared the stage with The Smashing Pumpkins, Warpaint, Foals, . And You Will Know Us By The Trail of Dead, Franz Ferdinand, Helmet, and Kylesa, and were personally called by Perry Farrell to open for Jane's Addiction at their Lollapalooza after party.