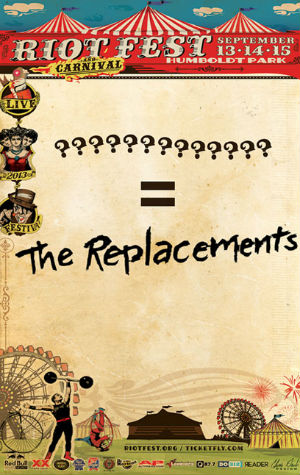 Seminal Minneapolis punk band The Replacements have reunited to play Riot Fest after a 22-year absence from the stage. It all began last fall, when the band got together to pay tribute to and help out former guitarist Slim Dunlap, who suffered a stroke in February of 2012. The great connection in the studio led to the band deciding to return to the stage and have some fun.

According to founding bassist Tommy Stinson, the band never actually broke up. He's often said that they simply walked off the stage near the end of their now-legendary last show in Grant Park in Chicago on July 4, 1991 and hadn't gone back yet.

The Replacements join the Chicago line-up featuring Fall Out Boy, Blink 182, Violent Femmes, Motorhead, Rancid, Blondie, Public Enemy, Rocket from the Crypt and a slew of other bands.

On a mission to create a punk rock state fair, this amazing 3-day festival takes place in historic Humboldt Park in Chicago, where a Ferris wheel, tilt-a-whirl, fire eaters, Lucha Libre and other attractions nestle in a gorgeous setting. Lagoons, shade trees and lovely fields yield to a stunning view of the Chicago skyline.