Streets Of London Launch New Charity Auction With Donations From The Rolling Stones, The Killers, Biffy Clyro And Many More! 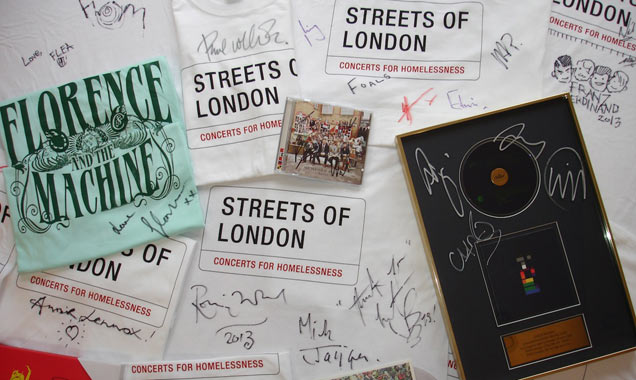 Streets Of London Launch New Charity Auction With Donations From The Rolling Stones, The Killers, Biffy Clyro And Many More!

Homelessness charity Streets of London will be holding a special online auction to raise money and awareness for homeless people in the capital. Bidding on eBay kicks off at 9pm on Thursday 20th March and runs until Sunday 30th March. Items include Artwork, CDs, T-Shirts and Vinyl. Taking part in this amazingcause and supporting the charity are an incredible array of world-class names including The Rolling Stones, The Killers, Biffy Clyro, Emeli Sande, The Vaccines and many more!

Justin Young from The Vaccines said: "After the bad weather of the last few months, more than ever is it easy for me to appreciate just how tough and awful living on the streets without structure and support is. And I think whatever people can do to contribute to making the lives of those people easier goes an incredibly long way."

Ian Steuart Fothringham, director of Streets of London said: "We're excited to have the support of so many major artists - including some of the biggest names in music - for this important cause. We fund specialist support for people who are homeless in London, ensuring that they have the advice and support they need to be able to move on and make lasting changes in their lives. Every penny raised at this auction will help. 2014 is shaping up to be an exciting year for us. We're finalising the line-up for our next Concert for Homelessness, and we'll be announcing the details in the coming few weeks!

The eBay auction starts at 9pm on Thursday 20th March 2014. To join in supporting this amazing worthycause, head to www.streetsoflondon.org.uk for more information.