Sonny And The Sunsets Announces 2013 Tour With Kurt Vile 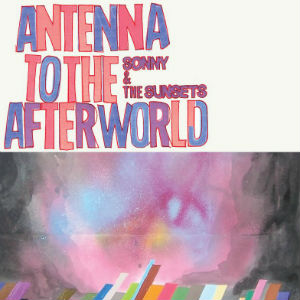 Sonny And The Sunsets Announces 2013 Tour With Kurt Vile

Today Sonny & The Sunsets share "natural acts," their third video from their latest album, Antenna To the Afterworld -- a story about a goofy tennis match gone awry.  The band has also added a ton of new tour dates, most of which find them opening for Kurt Vile in the Midwest and Southwest in August.

Death? Afterworld? Android lovers dying in the streets bleeding green blood? Homeless girls? Dogs stranded here from other planets? What are Sonny & The Sunsets getting at on Antenna to the Afterworld, a fast­moving record of new wave synths and post punk beats?

The murder of a close friend of the band led Smith to think a lot about death and life after death. Shortly after, a visit to a psychic/medium brought Smith into contact with another friend who had died.

This encounter with the afterworld inspired many of the lyrics on Sonny & the Sunsets' new record. And what a strangely entertaining odyssey it turned out to be.

As a writer ­­ of songs, or plays, or short stories ­­ Smith has never limited himself to one style or theme. The restless trend of changing gears dramatically continues on Antenna to the Afterworld, which marks a total musical and narrative shift from last year's Longtime Companion (a country record that chronicled Smith's break-up).

"I come from the planet of dogs / ... / And I walk on your streets / ... / and I can't wait to find / My little place in your weird world," Smith sings on opening track "Dark Corners," as the song's use of synthesizers lends the perfect sonic counterpart to the science fiction narrative.

His journey continues on "Mutilator," where he enchants the listener with a vivid description of the titular woman's lair: "Back at her place, a half eaten steak on a plate / And an old melon rind and some torn up drapes / And on her bed of nails she makes me lie / ... / Mutilator, you send shivers down my spine."

Later, "Girl on the Streets" proves to be one of the most immediate and infectious songs found on Antenna to the Afterworld, as Smith pairs an upbeat, major key melody with a candid depiction of a homeless girl he observes while walking the streets of his native San Francisco.

And it wouldn't be a Sonny Smith­-penned album without a reworking of a previously released song. Just like "Pretend You Love Me" was transformed from a 50s doo­wop revamp (on Hit After Hit) to a Dylan­esque country ballad (on Longtime Companion), on Antenna to the Afterworld Smith sheds the ramshackle country rock skin "I See The Void" wore on Longtime Companion and replaces it with a raucous high energy romp through classic Sunsets territory.

Soon after, the record closes with "Green Blood," a quasi­-spoken word track that uses male/­female call and response vocals to tell the tale of Sonny's affair with a spaceling. Though their love is ultimately doomed by their differences (and her cyborg husband), Sonny can't quite let her go.

"My antennas went deep into the afterworld / And I searched for her / Where the night is quiet / With star gleams / And comet trails," he narrates ­­ a beautifully composed conclusion to an (inter)stellar tale.