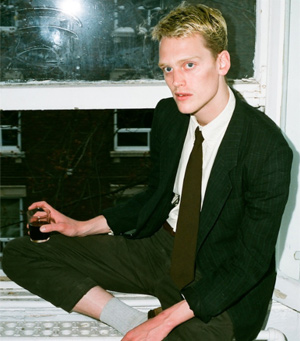 Sean Nicholas Savage plays two London headline shows on May 28 & 29 at Servants Jazz Quarters, an opportunity to catch the idiosyncratic charm of this artist at work.

Sean Nicholas Savage is a Montreal based singer-songwriter and recording artist. Over the last two years he released the albums, Flamingo, Won-Ton Jazz and Trippple Midnight Karma with Arbutus Records, each a new flavor in the palate of pop, always smooth and practical but with the darkness and depth of real life. A contemporary incarnation of singers like Elvis or Madonna, he marries the universal themes of love and pain with fingered keyboard bass playing, lush harmonies and hypnotic rhythms. As if each were an episode in a philosophical drama, Savage touches always on a theory or point and comes to at least a near conclusion with his compositions. His melodies are inspired and free, but with a wisdom and responsibility, flowing effortlessly under each captivating stanza.

Paramount of Montreal's after party scene, Savage is renowned for his captivating and inspirational solo performances, although each tends to be different from the last. This influence was recently articulated in tribute album called 'A Taste Of Savage: His Pupils Sing His Music' made in homage to Savage which featured covers of his songs from an all star cast of Montreal's DIY music scene including Mac Demarco, Doldrums, Majical Cloudz and Mozart's Sister among others. Savage has released exclusively with Arbutus Records, and was one of the first artists to join the label after its inception in 2009. Savage was an on/off resident at the historic Lab Synthese DIY space that the label was born out of.

On April 30th Savage will release his latest album 'Other Life' on vinyl, CD and digital, and will be supporting the release with a worldwide tour. Marking a compelling stylistic evolution of his sound, the new album incorporates elements of intimate synth pop, jazzy intonations and calypso, coupled with Savages' signature croon.

Songs like 'Lonely Woman' and 'More Than I Love Myself' move like a curtain dropping over close communion with the beloved, invoking the stranger, the ultimately and avoidably impersonal. In the songs of 'Other Life' he loses his men, his women, and the shadows of a place he has never quite been. This album is a mirror that will never break, held far above us all, constant as the sky, saying: 'Change. I will do nothing for you.' Somewhere far below is the jaw of the man forever lost and forever losing himself   Savage   dancing with you through chattering teeth.