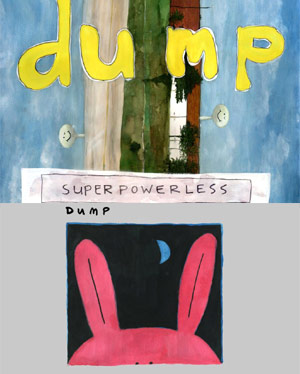 Dump, the recording and performing alias of James McNew, is reissuing his long out-of-circulation LPs 'Superpowerless' (1993) and 'I Can Hear Music' (1994) on Morr Music. McNew has been the bassist from legendary lo-fi rockers Yo La Tengo since 1992. Remastered by Bob Weston (Shellac, Mission of Burma), the LPs are being released on vinyl for the first time ever. 'Superpowerless' will be available as a CD, a double LP or digital download, and 'I Can Hear Music' will be available as two CDs, a triple LP package or digitally. Both will be released with the original album artwork, bonus materials and detailed liner notes. The 7" split of 'Secret Blood'/'Slow Down' was released January 24th on Morr Music.

Raised in Charlottesville, VA, McNew performed with Christmas from 1989 until they broke up two years later, at which point he joined Yo La Tengo. Yo La Tengo was known to have an extensive repertoire of covers-fittingly, McNew recorded an entire album of Prince covers as Dump. Tastefully chosen covers appear on much of his other recorded work.

The Dump moniker officially began in 1991, but he didn't have any releases after that name until 'Superpowerless' came out two years later. McNew recorded most instruments-guitar, bass, drums, organ and vocals-by himself, except for the instances in which his Yo La Tengo bandmates joined him. McNew captured everything on a 4-track cassette recorder. 'It made more sense to me if someone recorded a song in the moment by themselves, and got it to me as soon as possible,' he said of the process. McNew much preferred the lo-fi aesthetic he gleaned from this process to the clean, polished sound obtained in a traditional studio setting. What's more, some of the instruments weren't instruments at all-Dump was known to have used 'cardboard boxes as bass-drums' and to have prized 'the victory of enthusiasm over perfection.' He recorded 'I Can Hear Music' in a living room, which is particularly apropos for the lo-fi style he aimed for.

Dump has been joined onstage by his wife, Amy, his bandmates from Yo La Tengo, comedian Todd Barry and many more, and you can expect to see plenty of McNew with Yo La Tengo on the heels of their new release, 'Fade'.

I Can Hear Music Tracklisting:

Listen to 'Slow Down' here:

Dump: Slow Down by morrmusic