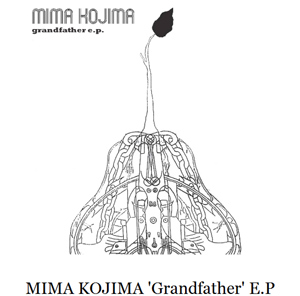 The first of two EP's by this artist to be released on Milky Bomb Records this year, 'Grandfather' is the debut from Mima Kojima. A name influenced by Manga and a fiery-arsed computer game; and that sums up this 5-track release - an off-the-wall/noise-esque listening experience that will certainly entertain and definitely fill a void..

Track 1. 'Press Play + Record': The energy and flare of the drums and bass will certainly relieve any outstanding dribble, or baggy eyes from any deprived sleep, and hit you up like Pepsi Max to start your daily routine. This is your new alarm clock! It's also the first track. Handy Harry!

Track 5. 'Paradox': This has a poignant, although warming intro' that is delicate to your needs. Your harsh hangover is cured. Give it a while; the dynamics intervene to make you feel sick, but sick in a good way! A quick pulse of intense drums will make you want to run away. Running will keep you fit and healthy!

In fact, this EP has an array of sounds to explore. The 3 tracks in between these examples will destroy your senses and certainly leave you with the infirm.

The music is put together from our friend - the personal computer - and Mima banging on a Korg synth. (Other tools and software weaponry were not harmed during the process).

NEWS: Mima Kojima is currently remixing 'Satyam Shivam Sundaram' by Sunday Driver ("a band to watch, without question" Sunday Times). The track is from their second album 'The Mutiny' and will join other remixes for an EP release this Summer. (Sunday Driver: London/Cambridge based, with Indian and British influences from past and present with the help of a pumpkin, a melon and the skin of a goat.)