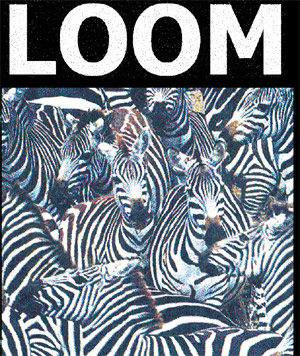 Loom release a limited edition of 200 cassettes, featuring songs by bands that have influenced them, through Hate Hate Hate Records on Monday 19th August. The five-song cassette features covers of Seasick (Jesus Lizard), Big Take Over (Bad Brains),Warsaw (Warsaw before they became Joy Division), Caribou (Pixies) and Bite It You Scum (GG Allin).

A different song from the cassette will be premiered every day from Monday 12th August - Friday 16th August at http://thefourohfive.com/

To launch the cassette Loom will be playing a special performance at The Old Blue Last in London (EC2A 3ES) on the 22ndAugust, admission free. As previously announced Loom play a residency at The Black Heart, 2-3 Greenland Place, Camden, London, NW10 0AP. Commencing on Wednesday 4rd September and continuing through to Thursday 24th October. The full list of forthcoming shows is: