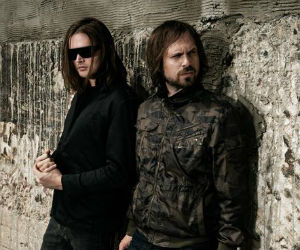 Black Onassis is the new project of former Kasabian member Chris Karloff. As a founding member, lead guitarist and one of the chief songwriters for Kasabian throughout their swift ascent to global fame, Karloff admits it was a kick in the teeth to leave the band back in 2006. But now he's joined forces with NYC musician Nick Forde as well as a host of special guest vocalists to enjoy some new-found creative freedom.

After his departure from Kasabian, Chris left his native home of Leicester, England to move to New York City - a completely different change of pace. Still feeling the burn from the separation, he used that, along with the influences of his new home, as inspiration to form something different. Something that gave him a chance to express himself more freely and be as openly creative as he liked. Karloff's signature dance laden songwriting has endured with a subtle sonic shift as he is now able to freely express his own compelling influences, from the stylistically metropolitan symphonics of Parisian house, krautrock and trance hypnoticism, to the classic sound of those acts which have become emblazoned in music history - all firmly anchored in interesting melodic structures and delivered with professional musicianship. Karloff has carefully constructed an album that expertly mixes psychedelic guitar rock with propulsive, throbbing electronic beats.

"'Electronic music to me is surprisingly soulful, there is a warmth that comes from the simplicity of sounds, something inconspicuously expressive and emotional", he says. "Growing up it was everywhere. Artists like Vangelis, Kraftwerk, The Prodigy and Tangerine Dream were massive influences on the songs I wrote with Kasabian, and even more so now. But rock music has always played a massive role as well, and I'm inspired by artists like Jimi Hendrix, Primal Scream and Nirvana. I try to fuse these two worlds to create the kind of music I want to listen to".

Karloff creates this sound with help from NYC musician and good friend Nick Forde (bass, keyboards) and rather than opting for a traditional lineup with a lead singer, they chose to work with guest vocalists. Lines went out to Liela Moss of The Duke Spirit, Morgan Kibby of M83 / White Sea, Ben Gautrey of The Cooper Temple Clause / Type Two Error, and friend Steven Young of The Black Marquee.

"Working with multiple singers makes writing every track a unique experience, a new musical adventure" says Chris. "A voice can change the whole dynamic of a song, and it's really freeing and feels limitless to write without being constrained by the vocal abilities or stylings of one person."

When it came time to start playing live, Black Onassis knew their unconventional lineup could pose a problem. To compensate for the fact that they would be touring with no singer, the band incorporate a huge visual element to the show. As Chris explains, "The fusion of sight and sound is the perfect marriage in terms of stimulation, and we wanted to put a lot of thought into making it an overall experience for our fans." The band teamed up with filmmakers and visual artists to put together a presentation that is tailor-made for each song. The result is an extreme and elaborate visual and sonic environment that floods the senses and takes people on a 60 minute journey through the album.

The project has already drawn critical intrigue. 'Innocence Blitz' had NME heavily tipping the project as one to watch, while Mojo featured the band only at their early stage in eager anticipation of the debut. Having taken the necessary time to nurture it independently, Chris Karloff and his new band of brothers are ready to officially release. Desensitized comes out September 23rd on their own label Minus Man Records.