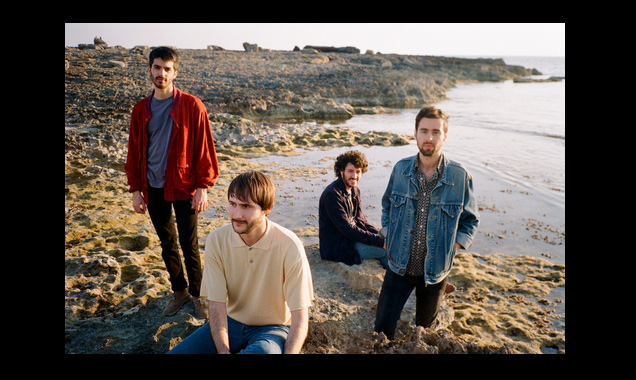 The perfect antidote to the so-called "Blue Monday", let's start the week in style with this breezy, summery tune from Majorcans, Beach Beach. "Just Like Before" is taken from their new album The Sea, which is due out in March on Barcelona label La Castanya. It is wonderful, breezy album that is chock-full of crystal-clear guitars, glittering melodies and harmonic jangle, providing a perfect blend of power pop and indie-rock.

Guitars soaked with shimmering chorus effects, driving basselines, a touch of fuzz and high-speed tempos shape an exciting and upbeat record. With The Sea, Beach Beach lean towards the jangle pop sounds of the 80's and bands who recorded for Sarah Records or Flying Nun, with added elements of 90's indie rock and classic rock from the 70's.

Beach Beach have spent two years swimming the front-crawl. With their fast and furious crystal-clear guitars and breezy melodic jangle, these Majorcans fled the island of their birth and immersed themselves in their debut album, Tasteless Peace (La Castanya, 2012), a record that dares you to go underwater and see how long you can go without breathing.

They return with a new underwater adventure, accompanied by a whole new set of swimmers. For their second album, The Sea (due out on La Castanya in March 2015), Pau Riutort and Tomeu Mulet are joined by Àngel Garau on drums and Lluís Cabot on guitar. It was recorded in early 2014 at the Caballo Grande Studios in Barcelona and was produced by Beach Beach and Cristian Pallejà and mixed by Cristian, together with Ferran Resines. The mastering was done by John Golden in Ventura, California.

The Sea welcomes you in and then bids you farewell, leaving you with twelve wonderful songs, each powerful and beautifully formed. As with their debut, the summery melodies contrast with darker lyrics, awash with metaphors and clever wordplay. The album was inspired by Blai Bonet's novel El Mar, "The Sea", as well as the work of Llorenç Villalonga. It explores missed opportunities and growing up in a world full of cowards, with no other option than to run headlong towards some uncertain future.

The Sea is due out on Barcelona's La Castanya label. Having toured toured extensively in Spain, they have played Primavera Sound Festival both as Beach Beach and as Gerard Love from Teenage Fanclub's backing band.  The album's UK release date is in March and there are plans for the band to tour in the spring. Beach Beach have previously played shows in London at The Old Blue Last and Upstairs at the Garage, and have performed at Liverpool's Sound City Festival.

With The Sea, Beach Beach have created a wonderful slice of summer to listen to all year round. Sit back and close your eyes, imagine you're lying on the beach, the sand is scalding hot and the sun is burning your skin. The music is like splashing your wrists with cooling water - warm and fuzzy yet refreshing, like the best feel-good music should be.