Planet Of The Apes Fun Facts, Quotes and Tweets

Quote: "Saying rather bad lines in an ape outfit for 60 days was worth it. That's what I say to my son, 'Your mother met your father when she was an ape'. There's definitely a fairytale aspect to it." Helena Bonham Carter on meeting the father of her children, director Tim Burton, on the set of their movie Planet Of The Apes.

Quote: "I took them down to the set when they were quite young, and they were not a bit frightened of the make-up and what not. But the conversation I didn't have with them... was that this is only this job... so they really thought I was an ape, and that when daddy went to work I was just being a monkey again." Tim Roth on taking his kids to the Planet Of The Apes set.

Fact: Planet Of The Apes star Estella Warren is developing her own cooking show.

Quote: "Yeah, I've had some bumps in the road. The Truth About Charlie wasn't a highlight. And Planet Of The Apes, though an amazing experience, didn't turn out the way I'd hoped." Actor Mark Wahlberg reflects on his less successful career moves.

Fact: COLLEEN ATWOOD, the acclaimed costumier who created the designs for movies like Memoirs Of A Geisha and Planet Of The Apes, helped rockers My Chemical Romance create their new "death rock SGT PEPPER" drummer-boy look

Quote: "They end up looking like something out of Planet Of The Apes if I don't pluck them regularly." Oscar-winning actress Rachel Weisz rues her bushy eyebrows.

Planet Of The Apes Quick Links 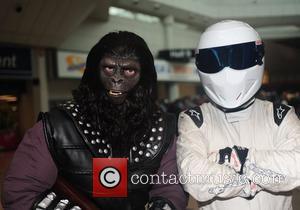