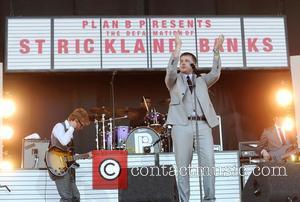 British singer/rapper Plan B has lined up actor Ray Winstone for an unlikely studio collaboration.
The star, real name Ben Drew, persuaded the movie hardman to add a narration to new track Office Affair, which will be included on the soundtrack to his film Ill Manors.
Drew has compared it to Blur's classic 1994 hit Parklife, which features a spoken part by actor Phil Daniels, and admits he was thrilled to work with Winstone.
He tells Britain's Daily Star, "Getting my favourite actor on my song is my proudest musical moment. It's like a Parklife for 2012, but a lot darker than Blur. Ray plays a prison officer on the song. It's Ray doing spoken-word poetry."
Drew and Winstone are currently filming a big screen remake of classic U.K. cop series The Sweeney.