Plan B - Who Needs Actions When You Got Words Album Review 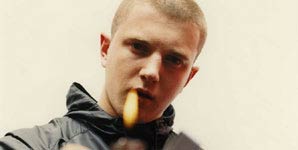 Once upon a time, hip hop actually spoke from the heart, used it's head and sounded as if it was made by people who'd actually been there, seen that, bought the t-shirt and threw it in the bin two days later, bulletholes an'all.

Now the genre has become the domain of chavs and wannabees everywhere, a bible of bravado and faded tracksuit bottoms, fake Jamaican accents and gold coloured, tin coated jewellery.

So where did it all go wrong? How did it get from the likes of Public Enemy and NWA to embarrassing, cringeworthy dirge like Akon and The Streets? Easy, whereas twenty years ago it was actually a statement of intent, a real-life document of life in run-down ghettos most of us in sweet suburbia wouldn't dare think about, it's credibility gradually got sucked in and spat out by the commercial managers at Sony, Warners and the rest of their ilk. Money talks then, which probably explains why a lot of this stuff is just an excuse for incessant self-indulgent bragging.

To be fair to Plan B, this isn't something you can label him with too much – although the inexcusable Prodigy stealing 'No Good' has to be heard to understand how inexplicably bad it really is. Instead, he's talking to the kidz about the kidz (errr, 'Kidz') or a half-caste girl he fancies called 'Charmaine'. But enough of the duller moments on 'Who Needs Actions When You Got Words'.

He also tackles some interesting, and surprisingly touchy subjects that no one in this or any other genre dare broach previously. 'Sick 2 Def' attacks paedophiles with an intelligence not normally associated with the big cars and girls stereotypes of 21st Century hip hop, while 'No More 'Eatin' deals with teenage anorexia. What sets Plan B apart from a lot of his contemporaries – maybe with the exception of the admittedly more folk-driven Jamie T – is his use of acoustic instrumentation along with beats rather than being solely reliant on samples, which makes for a refreshing change from the norm.

In places however, his vocal pronunciations do come on a tad too Dizzy Westwood but I suppose that's the rule of thumb for hip-hop these days. On the whole though, 'Who Needs Actions When You Got Words' isn't a bad debut record, but a bit more of the Queen's English wouldn't go amiss rather than badly drawled Americanisms.