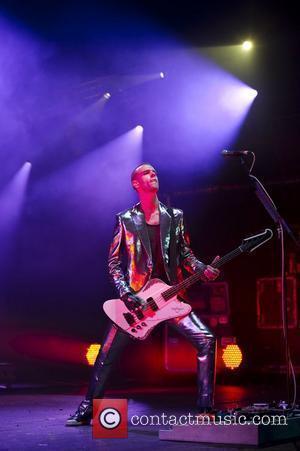 British rockers Placebo have been forced to apologise to fans after scrapping the final three dates on their European tour due to illness.
The Teenage Angst stars have been on the road for the past year and were due to perform on the Spanish island of Majorca on Friday (01Oct10).
But the gig was scrapped after frontman Brian Molko fell sick and now the band has pulled this week's (begs04Oct10) shows in Madrid and Lugo in Spain, and another in Portugal.
In a post on their website, Placebo says, "Unfortunately Brian Molko is unwell and has been ordered by doctors to take complete rest.
"It's a horribly disappointing way to finish our Battle For The Sun tour campaign and we hate letting our fans down by cancelling shows. We always try to ensure we can deliver what we promise so we can only apologise."
Details of the 37 year old's ailments have yet to be released.
Placebo is due to jet to South Korea on 21 October (10) to kick off the next leg of their worldwide tour.