'You won't find a girl in this damn World that will compare to me.' 'The West Country Girl' with 'A crooked smile and a happy heart shaped face', 'A glove of bones at her wrist' and 'A milk white throat', 'Her accent which I'm told is broad' and her hair, 'Wet with tears and goodbyes, her beautiful hair of deepest black, as deep as ink and as deep as the deep deep sea.' PJ Harvey in one guise or another has always been assured to stir the emotions of her listeners and lovers alike. After 20 years of making the most extraordinary music she is back and showcasing even more creativity than ever.

If there is such a thing as a typical PJ Harvey album, which there probably isn't, this is most definitely not it! After producing the sublime but underappreciated 'White Chalk' (Dear Darkness and When Under Ether well worth revisiting) some 3 years ago Polly Jean has had time to re-evaluate her song writing technique and become 'confident to do so.' 'The way I write songs has changed over the last 4 years. I am not a writer who finds it easy, I find it difficult' (You'd have been hard pushed to spot PJ's confessed weakness had she herself not pointed it out) 'Let England Shake' is the jaw dropping result, an album upon first listen you may have had trouble placing at all until track #5 when certain previous PJ traits creep in. 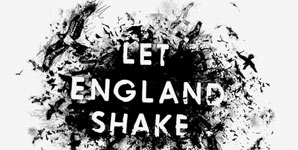 It's ten years since she justifiably won the Mercury Prize for Stories From The City, Stories From The Sea and time seems to have only heightened her ability to craft and execute very original, often narrative, songs of beguiling beauty. 'I listened to folk songs from around the World, including Vietnam, Russia and Afghanistan as well as England and Ireland' but she adds 'Wanted to make the music as up lifting as possible to counter balance the lyrics.' Some of the songs on Let England Shake, whilst never lacking depth or emotion, could even be termed pop with a capital P ('Jaunty' says Steve Lamacq) Gone, it seems, is the tormented banshee from the days of 'Rub 'Til It Bleeds'.

'Let England Shake' is ushered in rather wonderfully by the use of a sampled section from Istanbul (Not Constantinople) to introduce the title track. Polly projects her voice in a less sombre tone than you may be used to as her perky vocals sing over the plinky plonk score that contrasts starkly with the lyrical content. Some fabulously loose Sax under pins 'The Last Living Rose' before a repeated Bugle snippet and swirling guitar breaks into 'The Glorious Land' a song that catalogues and exposes the futility of war.

The first single taken from the album sees more up beat melodies, jangly guitars and revolving drum patterns used as the back drop to 'The Words That Maketh Murder'. It's an almost uneasy musical theatre as the backing vocalists chip in with 'These are the words, these are the words, the words that...' You can imagine 3 aged crooners spot lit in a darkened bar of David Lynch like weirdness interrupting their game of dominoes to synchronised finger clicking as they drop head and shoulder towards camera. Polly chooses to close the song out using a sample lifted from Eddie Cochran's Summertime Blues to great effect.

A more familiar sound for PJ Harvey is heard for a while from 'All And Everyone' a track that for the first 40 secs at least sounds a little like 'All Flowers Bend Towards The Sun' by Liz Fraser and Jeff Buckley.

'Death was in the ancient fortress,
shelled by a million bullets.
From Gunners waiting in the copses
with hearts that threatened to pop their boxes'

The song slowly builds before plateauing to reflect, chillingly recounting more horrific tales of lost life. (If she were to only sing the word anchorage in this song it would still be brilliant!) 'On Battleship Hill' Polly sings her first duet of the album as she splendidly captures the beauty and cruelty of nature with more wonderful words...'Jagged mountains jutting out, cracked like teeth in a rotten mouth.' The fuzzier guitar sound of 'In The Dark Places' introduces possibly the only 3 songs that wouldn't have sounded too ill at ease on White Chalk as PJ manages to so poetically convey tremendously moving and emotive subject matter so eloquently. She explains that she 'tried to make the music indefinable' and act 'As a song correspondent from the front-line.'

The album draws to a close with 'Written On The Forehead' a fantastic fusion of Reggae and folk before the hymn like 'The Colours Of THe Earth' sadly brings down the curtain on one of the best forty musical minutes you will experience this year. (Mercury number 2?)

Let England Shake was crafted over the course of two and a half years, 'writing daily and discarding an awful lot of material.' It was then recorded live in real time in just 5 weeks, as opposed to her previous albums 5 months, with long time collaborators Mick Harvey and John Parish (Both of whom also co-produced with PJ and Flood) as well as Jean-Marc Butty. The results speak for themselves, Polly's attention to detail, research and study, new found confidence in writing differently and her 'Superlative' (Thank you Stuart Maconie) songmanship have manifested themselves in a truly awesome album.