Latino Rapper Pitbull Took Aim At Business Mogul Donald Trump For His Ill-advised Remarks On Mexican Immigrants In America By Declaring The Would-be Politician Had Blown His Chance Of Becoming President Of The U.s. 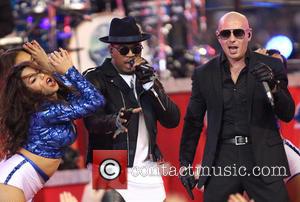 Trump has been under fire since he announced his bid for presidency last month (Jun15) when he suggested many Mexicans in the U.S. are "rapists" who brought drugs and crime into the country.

As a result of his controversial remarks, bosses at networks NBC, Univision and Televisa decided to dump coverage of his Miss USA pageant, which aired to low ratings over the weekend (11-12Jul15).

During his acceptance speech, the superstar took a moment to call out Trump for his remarks, prefacing his own comments by admitting that he's stayed at Trump's hotels and used his helicopters.

He said, "I am not political. I am a musician. But more than anything, I am Latino."

Pitbull received a rousing round of applause from the audience at the BankUnited Center venue in his hometown of Miami, Florida, when he suggested other presidential candidates such as Hillary Clinton, Jeb Bush and Marco Rubio step up their game in order to beat Trump in the race.

As the crowd continued to cheer, Pitbull exclaimed, "Donald Trump cannot be president! So Donald, on behalf of all the Latinos - be careful of El Chapo!", referring to Mexican drug lord and recently escaped prisoner, Joaquin Guzman.