Pitbull Countersues Lohan Over Give Me Everything 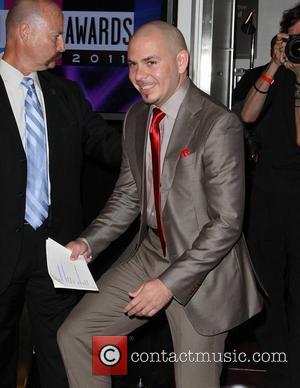 Rapper Pitbull is countersuing Lindsay Lohan over a defamation lawsuit she filed against him, insisting his reference to her legal problems in the lyrics of hit single Give Me Everything is justified considering her recent multiple jail stints.
In the suit, filed in August (11), the Mean Girls star accused Pitbull of exploiting her name in the tune, in which he rhymes, "Hustlers move aside, so I'm tiptoeing, keep flowin'/I got it locked up like Lindsay Lohan."
The actress took offence to the lyrics, claiming they were defamatory and destined to cause irreparable harm, and she filed legal documents in New York State court, seeking an injunction to stop the broadcast of the track, which was co-written by Ne-Yo.
Pitbull subsequently apologised to Lohan, stating he didn't mean to "defamate (sic), degrade or hurt" the star's career.
However, he has now filed a countersuit blaming Lohan for damaging her own reputation and highlights the embattled actress' recent run-ins with the law, including a 30-day jail sentence for a probation violation - her second offence this year (11).
Pitbull is also questioning whether Lohan is eligible to file papers in New York - claiming she was a resident of Nassau County - when she has been spending most of her time in California, where she has been serving probation and fighting her latest troubles.
His countersuit states, "In light of Ms. Lohan's continuing obligations to the State of California, as well as the foregoing facts, Ms. Lohan is a citizen of California, not New York."
Lohan checked into Century Regional Detention Facility in Lynwood, California on Sunday night (06Nov11) and served less than five hours behind bars for the probation violation before being released early on Monday morning (07Nov11). The sentence was handed down to the star last week (begs31Oct11) after she failed to adhere to the rules of her community service.
Lohan has been attempting to repair her image and reputation following a string of legal woes over the past two years, which included a stint in rehab and a house arrest at her Venice, California property.