Ahead of the release of the debut album, Pistols At Dawn will be releasing their first official single entitled 'Backwards' on 6th February 2012. It is taken from their album 'Tarnation', which is a perfect mix of 70s folk fused with beat-driven psychedelic sounds. The album will be released on Tres Beau Records on 20th February 2012.

The video to the track is now available and brings fresh meaning to the phrase "Why the long face?" We follow a day in the life of a man with a horse's head. Unfortunately, it is not a good day for him, as he gets fired from work and discovers his wife's infidelity. 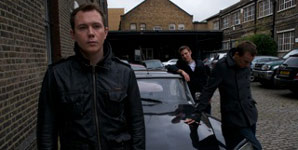