Review of Why Love Now Album by Pissed Jeans

Spoiler alert: Pissed Jeans just like picking up that dirty ol' snake of conformity by the tail and giving it a shake. Why Love Now is their fifth album, one that seemingly marks an ever-diminishing quantity of f***s being given about what most other bands would perceive as trying to connect to an audience; instead, the abominable quartet prefer to trawl modern life's darker stuff with a salacious grin and double helpings of mocking deprecation. 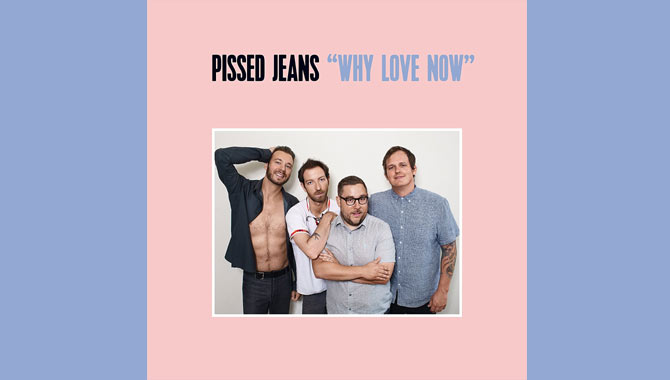 It's a place in fairness which lead singer Matt Korvette is pretty comfortable with, pegging their philosophy out with unrepentant statements such as "Rock bands can retreat to the safety of what rock bands usually sing about... I'd rather not shy away from talking about the internet, or interactions in 2016". They're satisfyingly true to their word, never more so on the sludgy, post hardcore opener Waiting On My Horrible Warning, during which the singer grinds his way through a mis spent youth now long behind, replaced instead by downhill crawl to the sort of physical breakdown which heralds the rude awakening of old age.

Gloomy, right? Well yeah. For Korvette life's just like a box of chocolates - empty and full of someone else's mess - and on The Bar Is Low he focusses in on the modern celebrity condition of self revelation, a process by which he's acerbically claimed "Every guy seems to be revealing themselves as a sh*thead". Quite. Whilst he rasps in condemnation the band unload a kick-ass metal blues concoction in the mould of old-timers Jesus Lizard to square it off; intense and raw, it proves that the trap of perceiving Why Love Now as just noise would be an easy one to fall into, but a lazy mistake.

Not that during the dozen tracks here it ever takes it's foot off the listener's throat. The lighter moments are relative, but optimistically you could slot Cold Whip Cream's furious barrage and the irascible scrape of closer Not Even Married into that category, despite the constant magnifying-glass lyrics that invariably thrust weakness and extremes to the surface of an uncomfortable brew. PJ also do full bore, throttle open, as the eighty-eight seconds of Worldwide Marine Asset Financial Analyst shows, a tempo which at least for once allows the invasion of the listener's reeling head space a rare minute and a half off.

Produced in part by No Wave doyen and general cultural fly in the ointment Lydia Lunch, Why Love Now is as much a vehicle for Korvette and Pissed Jeans' ideas as a narky melting pot of anti metal. It reaches an apex of odd during I'm A Man, a monologue of testosterone OD'ing self absorption and sexual fantasy both written and delivered by novelist Lindsay Hunter, simultaneously horrific and very, very darkly funny at the same time, an effect which the more familiar you become with this record, the more you suspect our hosts are constantly trying to deliver.

The choice of laughing at the absurdity is of course your own, as is the one to see the 21st century through some prismatic lense that makes its macabre seem normal. Only once are PJ willing to give it to you relatively straight - on the otherwise gloomy Love Without Emotion - but that feels almost like a defeat; moving back to surrealism, the rubbery bass grind of Activia imagines a personal coach embodied as dairy, help that can be eaten and literally digested, music as good bacteria. It's probably not even the weirdest piece of conceptualism on Why Love Now, but then again here are a band who've rarely played well with others. Their latest album is a calculated, sleazy thought bomb from way out there, one that open minds should appreciate, if not those who live solemnly in moral glass houses.