The video for Parabolic Delusions sees archive footage projected onto various shapes. The footage corresponds to the lyrics of the song at some points.

Pinkunoizu are a four piece Danish band: Jeppe Brix (guitarist); Andreas Pallisgaard (guitarist, vocalist); Jakob Falgren (guitarist, keyboardist, bassist) and Jaleh Negari (drummer). All four were in the collective Le Fiasko but formed Pinkunoizu - the Japanese word for pink noise - at the end of 2009. Free Time! was self-recorded in Copenhagen and Berlin. Pinkunoizu are also set to tour the UK at some point in 2012; more details will be announced soon.

Le Fiasko was formed in 2007 and their self-titled debut album was released in 2008 to positive reviews. 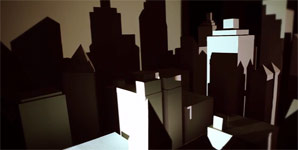