Pink says her daughter Willow enjoys being the ''centre of attention' and she thinks the tot may be a ''violent'' sibling. 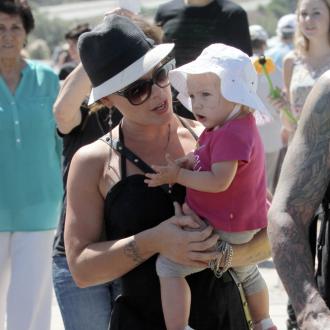 Pink worries her daughter would be a ''violent'' sibling.

The 'Just Like a Pill' singer admits her three-year-old daughter Willow enjoys being the ''centre of attention'' and she isn't sure the tot would enjoy having a baby brother or sister.

She told 'Extra': ''I don't know if she would. I think she really enjoys being the centre of attention... I see siblings that are kind of violent toward their younger ones, and I feel like that might be the way she goes with it.''

Meanwhile, Pink, 34, thinks Willow takes after her father Carey Hart - a daredevil motorcross racer - and not her.

The star said: ''She's a maniac, she's an absolute maniac - which is all her dad's fault. I am physical, but I'm cautiously physical. Carey is reckless and Willow is taking after him.

Pink, who describes herself as a ''homebody'', also revealed she loves nothing more than spending time with her family.