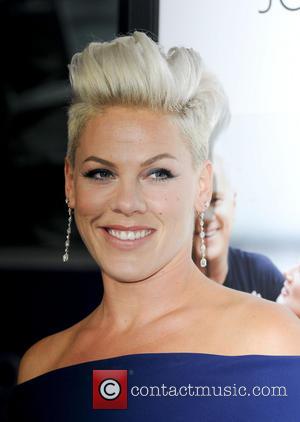 Pop star Pink has lashed out at fans and critics alike who took to Twitter.com earlier this week (beg28Oct13) to criticise her husband's parenting skills after he posted video of his first dad-and-daughter motorbiking session on Instagram.

Proud papa Carey Hart, a professional biker, shared images of his day out with two-year-old daughter Willow riding around with him wearing pink earmuffs but no helmet alongside the caption, "Been waiting for this day for a very long time. Willz went for her 1st ride on my motorcycle around the pits today."

He added, "She was pumped the whole time. When we stopped, she gave me a big hug and said it was fun, thank you Papa. That's my girl."

But fans and followers were far from impressed and took aim at Hart for not considering his daughter's safety - and the online remarks and tweets appears to have riled his wife.

She took to Twitter.com on Tuesday (29Oct13) to fight back, writing, "If any of u have more experience on a bike than my husband, then I will listen to your opinions on how he should take my daughter for a ride.

"I can't promise I will care, but I will listen none the less."

But her tweets simply opened up a fan forum about biking safety with one fan firing back, "Wait until she's 16 and let her decide for herself. Bikes are no joke!", which prompted an angry Pink to respond, "Yeah ok. I've never met you but that's great."

Another fan wrote, "I wouldn't like the idea of a child so young being on a bike," which led Pink to shoot back, "Then I don't recommend it for your child."