Following the success of Pink's 6th album 'The Truth About Love', it's no surprise that her greatest hits collection has been re-released. While it doesn't feature any material recorded after 2010, it's a surprisingly comprehensive overview of Alecia Moore throughout her twenties. At this point I should reveal that I don't own any Pink records, neither am I likely to, but it's for that reason that 'Greatest Hits.So Far!!!' seems to work so well. In many ways, it resembles Madonna's 'Immaculate Collection'; while you may not realise it beforehand, you'll know many more of her songs than you thought. To be honest, that familiarity is why this collection feels justified rather than existing as a cynical cash in on her chart success. 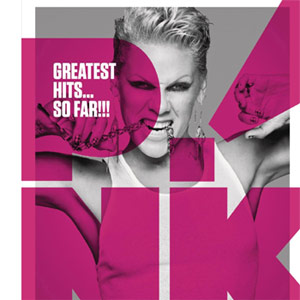 It's not perfect and, while useful for the uninitiated, the roughly chronological track listing could be mixed up a little to make the album feel more cohesive. But despite minor gripes, 'Greatest Hits.So Far!!!' does exactly what it sets out to. It paints Pink as a multi skilled artist, who's straddled the pop charts without sacrificing artistic credibility. There are very few other current artists that sound as comfortable singing a political protest song ('Dear Mr President') as they do a party song ('Raise Your Glass'). Along the way she's more than happy to poke fun at her contemporaries ('Stupid Girls') and deal with divorce ('So What'). In most cases, it's her punky and sassy attitude that makes her songs endearing. It's refreshing to hear someone who isn't afraid to write about her own life with a certain amount of venom. But, as this collection shows, that hasn't always been the case.

The first three tracks demonstrate the very standard R 'n' B and pop format that Pink was initially known for. 'Get The Party Started' has a certain amount of charm, but it hasn't dated that well. Neither has the Destiny's Child-lite vibe of 'There You Go'. It's only when 'Don't Let Me Get Me' starts that you realise that Pink has really found her feet and begins to hit her stride. Thankfully, the team up single for the movie Moulin Rouge ('Lady Marmalade') is missing here, although that song did firmly push Pink into the spotlight, allowing her to take a little more artistic control of her career.

From that point on you'd be hard pressed not to recognise a single track, which acts as a reminder that Pink has dominated the charts for the best part of a decade. While some of the relevance of the parody on display has been lost over time, her metamorphosis from pop princess to rock performer is undeniable. She's not afraid to touch on darker subject matter and introspection ('Sober', 'Family Portrait', and 'Who Knew'). At the age of 33, it's impressive to think that she's managed to re-invent herself so many times, to avoid the pop chart shelf life that many of her initial contemporaries have fallen victim to.

While 'Greatest Hits. So Far!!!' may have little new to say about Pink's most recent material, there's very little wrong with the collection as a whole. It's fun, familiar, and far from formulaic. Let's hope that the next decade is just as productive for this self-professed troublemaker.