The Minions are a prehistoric race with a love of bananas and not the biggest brains individually. Together, their life's mission is to serve the deadliest villain around - but they are not very good at keeping them safe. From the scariest dinosaurs, Egyptian kings, Napoleon and even vampires, Minions have been around to assist the world's tyrants with their dastardly deeds, but it wasn't long before they tragically ran out of baddies to aid. Bored, desolate and miserable, three Minions named Kevin, Stuart and Bob decide enough is enough and set out to find a new master. Trekking through freezing mountains, sprawling pastures and never-ending oceans, they finally arrive in 1968 New York - 42 years before they met their future partner Gru. It's their they meet Scarlet Overkill - an evil mistress with whom they must band together to save their kind.

Former evil-doer Gru, who once attempted the career-defining heist of stealing the moon, has seemingly left a life of evil deeds and landed himself a new kind of job. Albeit fairly reluctantly and without actually having a choice, he has been enlisted by Silas Ramsbottom of the Anti-Villain League on a world-rescue mission as a new villain arrives in town, to the delight and pride of his young adopted daughters Agnes, Edith and Margo. He and Agent Lucy Wilde must now embark on a new kind of adventure with the help of Gru's faithful, blabbering Minions. But with interfering neighbours coupled with his girls becoming older and smarter, saving the world from a ruthless rogue seems the least of his worries.

'Despicable Me 2' is the wonderful follow-up to the Golden Globe nominated 2010 animated comedy 'Despicable Me'. It has been produced by the geniuses behind 'Ice Age' and 'Shark Tale' comes 'Despicable Me 2' and sees the thrilling return of directors Pierre Coffin and Chris Renaud ('The Lorax') with screenwriters Cinco Paul and Ken Daurio ('The Santa Clause 2', 'Horton Hears a Who!', 'Hop'). Already with an award nomination under its belt (from the Golden Trailer Awards), this adorable flick will be released on June 28th 2013.

Watch the Despicable me trailer here!

The Minions Are Back! 'Despicable Me 2' Full Trailer Finally Arrives (Trailer And Pictures)

The full trailer for 'Despicable Me 2' has finally arrived with plenty of laughs to go around.

Gru And The Girls

The Despicable Me 2 trailer is finally here seeing the return of your favourite Despicable Me characters including former supervillain Gru, his beloved foster children and his faithful Minions, as well as some entertaining new additions to the Despicable Me cast.

We got the slightly bizarre teaser over a year ago showing nothing more than the funny yellow aliens that serve Gru (Steve Carell) performing an adorable rendition of The Beach Boys' hit song 'Barbara Ann'; it certainly managed to keep the plot under wraps though it was far from a disappointing introduction into the much anticipated sequel to this Golden Globe nominated flick. Following Gru's evil plot to steal a shrink ray and hijack the moon in the first film, he adopted three young girls named Agnes (Elsie Fisher), Edith (Dana Gaier) and Margo (Miranda Cosgrove) after taking pity on their misfortune. This time round, it looks like Gru has taken fatherhood in his stride and devious deeds seem to be the last thing he's thinking about, particularly as the eldest girl is getting, well, a little too old for his liking. Just as the prospect of a quiet life looms, however, he is abducted by a feisty agent (Kristen Wiig) from the Anti-Villain League, headed by the pompous Silas Ramsbottom (Steve Coogan) who wish to use him to help save the world from a new evil - and Gru is well up for the challenge!

Continue reading: The Minions Are Back! 'Despicable Me 2' Full Trailer Finally Arrives (Trailer And Pictures)

Having hatched an evil plot to steal the moon in the first movie, Gru appears to have let fatherhood take over from his dastardly passions after the adoption of Agnes, Edith and Margo. However, his bad deeds have not been forgotten. As his new daughters get older, he is forced to join Agent Lucy Wilde of the Anti-Villain League in their plot to overthrow a new evil rival with plans way beyond their competency. While his minions attempt to rescue him from this difficult new project, he is ultimately forced to agree to the mission after facing formidable, if ridiculously named, company director Silas Ramsbottom. It's Gru's first time on the side of good - but will he find it a suitable career move from his former immoral ways? Or will this new evil give him plenty of new ideas?

'Despicable Me 2' was the hugely anticipated follow-up to Golden Globe nominated animation 'Despicable Me'. From the producers of 'Ice Age' and 'Shark Tale', it has been directed by Pierre Coffin and Chris Renaud ('The Lorax') alongside writers Cinco Paul and Ken Daurio ('The Santa Clause 2', 'Horton Hears a Who!', 'Hop'). Featuring that smash hit single 'Happy' by Pharrell Williams, the film was released in July 2013.

Watch 3 clips from Despicable Me 2 here!

Following the evil schemes of Gru in 'Despicable Me' involving the hijacking of the moon with his little yellow minions and wicked cohort Dr. Nefario, 'Despicable Me 2' sees their anticipated return in the summer of 2013. Having competed against his rival Vector by going one up from his Egyptian Pyramid theft and successfully stealing the moon, the first film saw Gru adopting three young girls and giving up the stolen rock to rescue them from the ruthless super-villain. Does his success make Gru learn his lesson and become a decent man after his newfound fatherly affection for his girls, or will he and his minions return with an even more abominable plot to become the most notorious super-villain in the world?

Up until recently Gru has always been the number one supervillain until a tremendously nerdy supervillain called Vector takes his crown. Now sworn archenemies Gru must come up with a plan that's so devious that Vector will never be able to outdo him Gru plans to steal the moon! 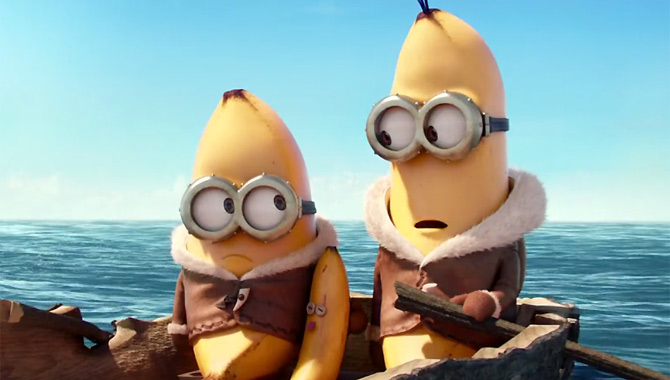