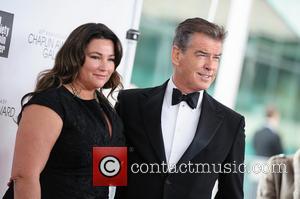 Pierce Brosnan is returning to the spy game for a new thriller - and he's teaming up with Bond girl Olga Kurylenko for his new mission.

November Man has been adapted from a book of the same name, which Brosnan and his production company partners have snapped up the rights for.

Brosnan, who turns 60 next month (May13), tells Wenn, "I'm about to go off to Serbia and do my own spy movie. Finally I have the director I want in Roger Donaldson and we're gonna do a piece called November Man so I shall jump back into that arena.

"I think there's another room on the stage for another spy! Daniel (Craig) can't have it all to himself. My co-star is a lovely actress called Olga Kurylenko, who seems to be going through leading men like hot dinners. She started with Daniel Craig and she's gonna end up with Brosnan! She's a gorgeous actress, beautiful woman. She's in and it's the older spy, younger spy."