Former James Bond star Pierce Brosnan was stopped by TSA security agents at a US airport after a 10-inch hunting knife was found in his hand luggage. 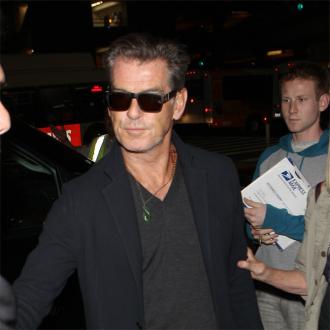 Pierce Brosnan was stopped by airport security after trying to board a plane with a hunting knife.

The 62-year-old actor was questioned by US Transportation Security Administration (TSA) agents at Burlington Airport in Vermont on Sunday (02.08.15) when a 10-inch knife was discovered in his hand luggage as he tried to go through security.

According to MailOnline, Pierce reportedly said to his 14-year-old son Paris, who was with him: ''I can't believe they're doing this.''

He is then said to have been patted down before being taken to another room for another screening.

The former James Bond star eventually made it through to departures where he caught a flight to Detroit.

TSA rules state that all knives are banned in hand luggage- except rounded or plastic butter knives.

Sharp objects and sporting goods including baseball bats, spear guns and bows and arrows, must be placed in checked luggage.

Pierce starred as James Bond in four movies including 'Goldeneye', 'Die Another Day', 'The World Is Not Enough' and 'Tomorrow Never Dies'.